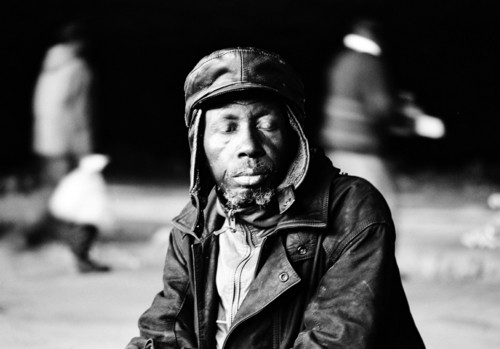 The galerie Michel Rein is pleased to welcome Carlier | Gebauer (Berlin) for the second edition of Berlin-Paris, a gallery exchange. Open from the 29th January to 27th February 2010, the group show is built around a common project between the two galleries and presents the works of Saâdane Afif, Rosa Barba, Michel François, Mathew Hale, Santu Mofokeng and Elisa Pône.

SAADANE AFIF
Born in 1972 in Vendôme, France. Lives and works in Berlin.
Experimenting with multiple art practises, and with no predetermined media, Saâdane Afif works on the exhibitions themselves and the receiving conditions of his oeuvre. He presents here two “sculptural” works, while allowing their meaning and possible interpretations to remain flexible : Untitled (Suspense) and the ready-made Essence, which draws its inspiration from a Parisian gas station sign. Saâdane Afif is laureate of the Marcel Duchamp price 2009 and will have a solo show at Centre Pompidou in 2010.

ROSA BARBA
Born in 1972 in Sicilia, Italy. Lives and works in Cologne and Amsterdam.
Rosa Barba’s films construct utopias, possible worlds, which evolve from a craving to take action, which is produced by the voids and displacements of our everyday reality. Those displacements are what Barba’s films often start from; their characteristics lead her to filmic interweavings of realities and potentialities.
In her use of film formats, celluloid and projectors, Barba is assembling an installative set up for an artistic production in which film is employed to register asynchronicities and breachings in past and present.

MICHEL FRANCOIS
Born in 1956 in Saint-Trond, Belgium. Lives and works in Brussels.
Alongside his photography practise, Michel François develops a particular use of sculpture and installation. Michel François unfolds a vast and complex oeuvre organised in rhizomes allowing him to proceed in thematic and formal cutout. His sculptures have multiple “meanings”; this variability/versatility results from confrontations with other sculptures, as well as the exhibition space and the artwork/space relationship. Michel François recently had an extensive solo exhibiton at the SMAK in Gent.

MATHEW HALE
Born in 1962 in Swindon, UK. Lives and works in Berlin
Mathew Hale describes his collages and drawings as the results of « associative improvisations », thus elevating chance as the selective tool and development agent of his works.
His taste for diversion produces some unexpected links between heterogenous images and in turns creates a political and/or humorous language.

SANTU MOFOKENG
Born in 1956 in Johannesburg, South Africa. Lives and works in Johannesburg.
Santu Mofokeng discovered photography as a reporter in the streets of Soweto. Both political and poetical, his work is tied with Black representation in South Africa and to the hardship of their life conditions. With a snapshot quality, his photographs are imbued with some piercing plastic and atmospheric traits mixing steams, sounds, smells and brutality. The galerie Michel Rein has presented Santu Mofokeng in the group show Self-portrait I & II in 2004

ELISA PONE
Born in 1979 in Pontoise, France. Lives and works in Paris.
Graduating from the Art School of Cergy-Pontoise, Elisa Pône was offered a solo show at the galerie Michel Rein in 2008. Indeterminate activity and resultant masses, 2009 associate images of live fires to printed reproductions of collages made from firework rockets wrapping papers; the remains of past pyrotechnical performances by the artist.
www.michelrein.com