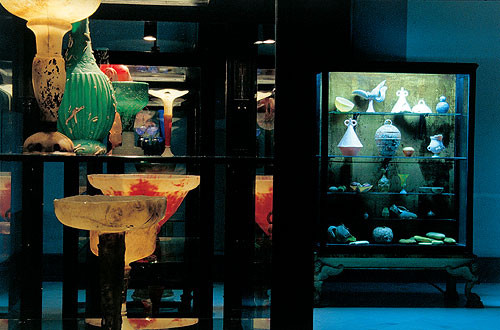 The galerie Michel Rein is pleased to welcome Florent Tosin (Berlin) for the third edition of Berlin-Paris, a gallery exchange. Open from the 28th January to 26th February 2011, the group show includes works of Kent Monkman and Gerd Rohling.

Kent Monkman is part of a new generation of Native American artists. His broad practice, which ranges from figurative painting to film and performance, explores the complexities of the flawed, yet enduring myth of the American West. Taking on the artistic traditions of Western nineteenth century painting, Monkman’s appropriations of ‘New World’ painting are meticulous recreations of large-scale, sublime landscapes. Monkman’s ‘trickery’ only becomes clear on closer inspection: these grand panoramas, painted in acrylic not oil, are populated with cavorting ‘cowboys and indians’. Toying with the notion of authenticity, these reimagined, often homoeroticised tableaux playfully subvert and distort traditional narratives and perceptions.
In his multifaceted work, Toronto-based Kent Monkman deals a table-turning hand on homogenising histories of Euro-American descent. Using parody and his flamboyant alter-ego Miss Chief Eagle Testickle as tools, he subtly turns colonial and pioneering myths of the American West into homoerotic playgrounds in orgiastic revisions of nineteenth-century pastoral scenes. By appropriating the imagery and technique of ‘New World’ landscape painters, and by subverting the usual roles of cowboys and Indians, Monkman presents a critique not only of history, but also of notions of authenticity and of visual culture as a nation-building exercise. He goes back in time to ‘queer the frontier’ and in doing so presents a humorous and alternative view to the narratives in history books and museums.
Raised in Winnipeg of Cree and English/Irish ancestry, Monkman is well-placed to take on the complex history of contact between the ‘native’ North American people and European colonisers. From his early involvement in set design, theatre and film, he has continued, theatrically and humorously, to re-write histories of first encounters and colonial moments of art history by adding a transgressive sexuality and iconoclastic violence to the landscapes of nineteenth-century ‘history painters’ such as George Catlin (1796–1872) and Albert Bierstadt (1830–1902). As both target and figurehead for an aesthetic language of oppression, Monkman’s playful ‘cover’ versions of early colonial landscapes are designed to open up the past for re-examination. He participates in contemporary myth-making, presenting history as a fluid an subjective interplay between fact and fiction and, in the process, recuperates aboriginal power and customs.
Kent Monkman’s work will be exhibited at la Maison Rouge, Paris, in Spring 2011.

Imagination, appearance and reality, or the simulation and theatrical transformation there of; conceptions located at the cross-over of artistic value and mundanity; the dressing up of banality; and constructions within the domain of fictionality – all of these are coordinates and parameters in the art of Gerd Rohling. Over the years, Rohling has developed such a diversity of facets in his work – an oeuvre spanning nearly three decades – that a multitude of interrelationships, links and thematic references have evolved both within his various groups of works and in relation to Rohling’s artistic practice and use of materials.
Characteristic of Rohling’s artistic approach is the length of time he allows for his works and projects to emerge and evolve. Akin to a sedimentary process of layering and depositing, it nevertheless results in thriving complexes: projects such as his “First Biennale Liverpool” (1990/99) or “Biennale di Napoli”, on which Rohling has been working since 1990, have developed over time, growing ever more expansive and diverse in form and hence more expressive and complex.
Underlying the detail and epic long-windedness of Rohling’s conceptualisation process is his practice of working both “on journeys and in situ”. His sharpened gaze for what is typical of a site or place, or perhaps missing from it, coupled with his refusal to simply let things be and his desire to understand things situatively, makes it appropriate for him to work with material on site, to further develop his works at another place, extending their conceptual horizon, before perhaps returning them to their place of origin, where they actually belong.
Gerd Rohling’s works are at once real, mystical and concrete; questions arise within them. Rohling simultaneously confronts aspects of originality and imitation, themes of staging and (dis)illusionment, questions of illusion and being, of the worth and worthlessness of a given material with the question of the significance of an artistic intervention whereby an artwork produced from rubbish acquires intellectual value.
www.michelrein.com