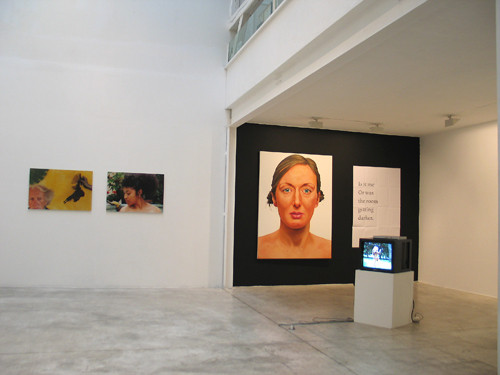 This exhibition gathers some artists together around the notion of "portrait".
Armand Jalut (b. 1976, lives and works in Paris) and Gerald Petit (b. 1973, lives and works in Dijon) invent painted portraits which refer to science fiction or the uncanny. Jalut’s works were shown at the gallery in September 2006. The artist defines his work as “quite a harsh kind of figuration in its treatment, a bit naïve, a bit vulgar, but without concessions” ( Particules , December 2006, see the interview by Yves Brochard and Catherine Laubier http://journalparticules.free.fr/decembre-janvier2007/sommaire.htm) . Gerald Petit, whose works were shown in Prague ( Same Same but Different , cur. Pascal Beausse) and Reims ( Supernova, Expérience Pommery , cur. Judicaël Lavrador) in 2006, produces portraits which have been qualified by P. Beausse as “dumbfounding”, because of the sheer size of the canvas or walldrawing and the facial expressions, which literally make the beholder speechless. http://www.geraldpetit.net
Maria Thereza Alves (lives and works in Rome) and Marianne Müller (b. 1966, lives and works in Zurich) are both photographers who regard the portrait as a much more personal practice. John Spencer and Mercedes Gomez , both photographs taken in Mexico by Alves, are portraits of the eponymous characters: Spencer, a sculptor related to Lady Diana who withdrew to Mexico after his family’s disapproval and Mercedes Gomez, one of the last descendants to Cuauhtemoc, the famous Aztec opponent to Cortes. Müller’s self-portraits from the series A part of my life , simultaneously mundane and erotic, feed on representational clichés of the female body and makes them their own.
Yuri Leiderman (b. 1963, lives and works in Berlin) will present a frenetic, autobiographic video work about his religion, his nationality and his affection for contemporary art ( Hassidic Duchamp , 2002).
Portraits will also feature Mark Raidpere ’s (b. 1975, lives and works in Tallinn) latest work. Raidpere, an Estonian artist, showed his works at the gallery in June 2006. After representing Estonia at the Venice Biennial in 2005, Mark Raidpere showed his works at Platform Garanti, Istanbul, Lenbachhaus, Münich, Camera Austria, Graz and Tramway, Glasgow en 2006. Andrey/ Andris (2006) is a weird video portrait of a young pole dancer.
A lightbox of the African Self-Hybridization series by Orlan (lives and works in Los Angeles) will complete the selection of works. Works by Orlan can be currently seen at the Chelsea Art Museum, within the exhibition Dangerous Beauty (until April 21st, 2007) http://www.orlan.net

DORA GARCIA: Zimmer, Gespräche/ Rooms, conversations
Dora Garcia 's (b. 1965, lives and works in Brussels) film, Zimmer, Gespräche/ Rooms, conversations (2006) will be presented in the projection room of the gallery. An encounter between a Stasi officer and his informer in an apartment in Leipzig is the setting for Zimmer, Gespräche . Neither the Stasi nor the city of Leipzig nor the GDR are mentioned by name; the film is set in an undisclosed place and time. Only the accent of the actors and their clothes provide any indications. Dora García did not intend to make a documentary or a fictional work. It is more a quest into communicating abstract notions such as fear, control, authority, subservience and power within certain historical circumstances. Concepts that are closely linked to issues such as secrecy, archiving and codes of behaviour - recurrent themes in the work of Dora García.
Zimmer, Gespräche/ chambres, conversations was already shown at Argos, Brussels and at Laboratoires d'Aubervilliers in 2006 and at the International Film Festival Rotterdam in January 2007.
http://www.doragarcia.net
Dora Garcia will be featured in the Actions and Interruptions performance program at Tate Modern on Saturday March 10th, 2007.
www.michelrein.com