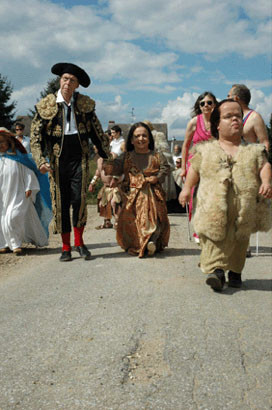 The practice of Christoph Schlingensief (born 1960, Oberhausen) represents a foray through diverse types of artistic engagement – from film-making to activism, from acting to directing, from painting to journalism. The multiplicity of materials that this implies has not only blurred the boundaries between traditional artistic categories but has also entailed a deconstruction and reconstruction of visual worlds; absorbing everything into itself, denying linearity and classical narration, the work makes excessive demands on the viewer’s sensory abilities. In the effort to summarise Schlingensief’s activities, one feels tempted to apply the term ‘universal’. Output from the past two years of this complex practice has been brought together for the artist’s first solo exhibition in a Swiss institution: from a (re-)deconstruction of Kaprow City (2006) – initially presented on a revolving stage at the Volksbühne in Berlin – and the 16mm film installation 18 Bilder pro Sekunde (2007) to a first presentation of the film version of The African Twintowers (2005-07).

During his early work with film, such as 100 Jahre Adolf Hitler – Die letzten Stunden im Führerbunker (1988, 100 Years Adolf Hitler – The Last Hours in the Führer Bunker) or Egomania – Insel der Hoffnung (1986, Egomania – Isle of Hope), Schlingensief established one of his most important aesthetic principles. By implementing overlapping visual and/or acoustic elements, he deluges the viewer with information, causing an implosion of our capacity for image recognition and clearing an alternative path for a new image montage and narrative to be created. This ‘total irritation’ provides a liberating chaos, which enables a new form of concentration and demands that the spectator actively engages his/her decision-making potential. In the theatrical works for which Schlingensief has gained recognition, such as Attabambi-Pornoland – Die Reise durchs Schwein (Attabambi-Pornland – The Voyage through the Pig), staged at the Zürich Schauspielhaus in 2004, the artist refutes the principle of illusion, so vital to current inter-disciplinary discourse, by coupling relics of the Wagnerian concept of the Gesamtkunstwerk with Antonin Artaud’s Theatre of Cruelty and the postmodern discourse of the abject.

Taking as his starting point American artist Allan Kaprow’s 18 Happenings in 6 Parts (1959), Schlingensief conceived a walk-through installation, which appears at the beginning of this exhibition. Where Kaprow’s central concern was to convey the theatrical elements of visual art, with the idea of liberating them from their painterly-contemplative stagnation, both he and Schlingensief achieve this not through the implementation of artificial, artistic activities but rather through simple gestures like the squeezing of an orange. Added to this, spatial separation makes it impossible for the spectator to see all the happenings simultaneously, which calls into question the fragmentary nature of vision; this is achieved in Kaprow City through the division of spectators into different groups and the execution of everyday acts, sometimes by people handicapped in some way or another. The introduction of people who exist on the margins of post-Fordist society is an element of Schlingensief’s working method; on the grounds of their apparent functionlessness, they become agents of critique. The reconstruction of Kaprow City – which, due to the changing of its function, is simultaneously deconstructed – not only indicates Schlingensief’s renunciation of theatrical space but also bypasses becoming a möbius strip; the city is reduced to ruins out of which new projections and play surfaces can be made.

For a considerable time, Schlingensief has used the medium of film intensively, which is reflected in the predominance it has been accorded in this exhibition. 18 Bilder pro Sekunde (2007, 18 Images per Second) is one of twelve 16mm looped projections of films shot with a Bolex camera – all of which were made during the preparatory phase of operatic productions of Wagner’s Flying Dutchman in Manaus. This demonstrates Schlingensief’s particular interest in the materiality of film, in its organic properties which confer the possibility of a slow disintegration – the actual disappearance of itself. The film is repeatedly entangled and shredded and slowly whites out; memories are cathartically extinguished, purified through the projectors’ lamps, released. Vestiges of its predecessors from the last exhibition location are preserved in coffin-like vitrines, with the recorded history of the moment at which they were torn apart. In this context, it is possible to read the monumental apostle figures derived from a Manaus carnival wagon. Framing the projectors, they refer to the Last Supper at which Judas' act of betrayal incites the passion of Christ. In Schlingensief’s work, images are always given up to depletion and sent on a ‘path to salvation’. The title refers to the filmic paradigm of twenty-four frames per second, and revises Godard’s claim on the truth being told twenty-four times in that second. For Schlingensief, eighteen frames are enough to obtain a flowing image; the dark phase – the time span between two individual frames – forms the actual creative impulse, the image’s ‘coming alive’.

The first film edition of The African Twintowers (2005-07), an 80-minute version which will be inaugurated in the museum, can be described as an ‘outgrowth’ from Schlingensief’s Animatograph (2005). An ‘actionistic photoplate’, an installation on a revolving stage, this in turn refers to the historical ‘animatograph’, a gadget dating back to the early period in film which became a synonym for the first functioning camera. A cinematograph which can be used for taking and projecting pictures, Schlingensief’s Animatograph can be used not only as the projection surface but also as the location of action for The African Twintowers. This film was shot in Lüderitz (Namibia) and revisits the events of 9/11 using dramaturgic elements from Nordic saga as well as from African shamanism. Figures, such as Hagen von Tronje, Odin and Edda, people of Hereros (an African pastoral tribe) appear, accompanied by music by Patti Smith with lyrics by Elfriede Jelinek.

‘In my opinion it is possible to fail with zest, joy and intent. In my work it was always a failure, created through the abolishing of the home straight and the goal, from time and space. If one manages to inwardly accept that failure is necessary to make power useable, then a lot can happen.’