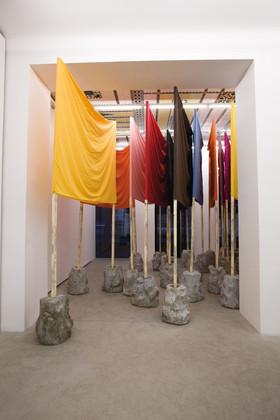 In recent years, sculpture and related forms have played a considerable role in the exhibition programming of the Migros Museum für Gegenwartskunst and its efforts to enlarge its collection. The three-part presentation of art from the collections brings together works that raise questions concerning the potentials of sculpture. As a genre, sculpture—whether figural or abstract—occupied a central position in the history of art from the classical age to the modernist era. As the art historian Rosalind Krauss has argued, since the onset of postmodernism, the conception of sculpture has been expanded as its boundaries have become blurry—sculpture has quite literally been knocked off its pedestal. Sculptural creativity extended into a variety of media and materials, exploring the possibilities of space.

The works on display interrogate the transformation and status of sculptural art and examine the ways it is perceived. They incorporate objects from urban space or address the role and function of sculpture in the public sphere. In the oeuvre of Phyllida Barlow (b. Newcastle upon Tyne, 1944), elements of urban architecture play a central part. Her often expansive works examine political and psychological dimensions of objects steeped in symbolic power such as flags or signage to address the sculptural qualities of architectonic forms in public space.
The traditional logic of sculpture is closely associated with that of the monument; the historiography of art has frequently defined both genres on the basis of their representative potential and their ability to anchor remembrance. Daniel Knorr (b. Bucharest, 1968) studies this historically determined alliance in a piece of performance art: he makes statues in central Copenhagen wear masks and then takes their photographs. Covered by a balaclava, their faces articulate a critical view of the representation and function of history in public places.
Mark Leckey (b. London, 1964) likewise addresses sculpture in the public sphere. The protagonists in his video are sculptures set in London’s urban space, presented here in a digital slide show accompanied by thudding music. The work brings the sculptures, which are for the most part fameless and unappreciated, to our attention and stages them in a fresh perspective.
Jimmie Durham (b. Washington, Arkansas, 1940) explores political and social issues; his reflections usually manifest themselves in sculptural compositions of “objets trouvés.” His sculpture Alpine Substance on Wolfsburg Construction consists of a bright red VW Beetle and a massive boulder: it looks as though the car had been hit by a falling rock or a meteorite while traveling at full speed. As with many of Durham’s works, the static object evinces traces of a performative action—in this instance, the artist directed the rock to be dropped onto the car’s roof in an act of deliberate violence. Durham examines issues of ecology and the growing omnipresence of technology in subtle and often ironic and funny ways.
www.migrosmuseum.ch