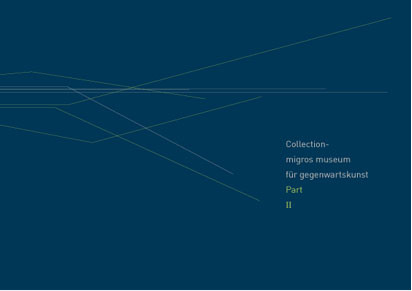 In the context of a series of exhibitions over the course of the year combining various viewpoints the second collection presentation gathers together a choice of works that have been acquired by the museum since its founding. The current concern of the exhibition is to have the works make contact with current art production to integrate them in lively contemporary environment. The exhibition Collection Part II involves purchases of the early phase of the museum which take on various forms of stereotypical images, structures of perception and representation of power and violence.

At first glance, the sculptures of Fabrice Gygi (*1965) seem hardly to differ from objects which suggest they have a concrete function. They imitate objects and architectonic elements which in the provisional environment of the public space are to serve, for instance, a protective purpose and are subordinated to time limits. Societal notions of security and society’s inherent fear are reflected within them. Dérouleur de tapis rouge (1999) is a metal mobile trailer upon which a rolled up red carpet is attached. A part of the carpet still lies on the floor - just at this moment it seems to serve as a prop on the stage of a spectacular production. An irritating element is provided by a blue light attached to the trailer recalling the alarm of police presence. It refers to its possible use in a political context and to its own anticipated security. Thus the red carpet, alongside its connotation as a prop on the stage of the glamorous contains another level of meaning. In his sculptures and installations Gygi investigates power and the political and its inherent violence and potential aggression – thus the red carpet also exercises its symbolic (political) power on site.

Likewise Costa Vece (*1969) creates situations reflecting on themes of violence and rebellion. The Bomb (1999) is made up of associative used materials and in spite of the rough materials is in constant movement. It involves a cobbled up architecture of awnings and camouflage nets, in which the interior houses cabled-up gas bottles, oil drums and backward running clocks. The short film sequences on the three monitors as well as the non-stop ticking give the feeling of being threatened by a continually racing count down, which in its effect of an unknown and violent end perceives as potency. Central to them is the directness and aggression of the created scenarios of potential catastrophes. At the same time the work reflects media exploitation and mediation of war and violence – it is possibly also only about a war game setting inflated to a real dimension.

On seven monitors distributed in the room the distorted grins of clowns are visible. They are on the floor or placed on chairs and sometimes appear to be sleeping with their eyes open. They change their position now and again. When walking through the installation the visitor is bathed in a sound. Twelve sensors which react to the movements of the audience play back cynical laughter with various differing nuances. Dog Days Are Over (1996) was part of the first exhibition – a solo presentation by Ugo Rondinone (*1963) – which took place in 1996 in what at that time was the newly founded museum. The clowns were attending in the context of a performance during the opening of the exhibition. They were filmed and later shown on monitors. With them Rondinone availed himself of a classically tragic motif – the clown who makes fun of himself but also of his spectators and might at least take pleasure in the comic aspect of suffering. The role of the merry jester oscillates between the humorous, cynical and evil as the honest speaker of the unsaid. Also accumulated through the motif is the theme of artistic self reflection as well as the clichéd alien attribution of the artist’s identity and the resulting interactions arising from it.

Piotr Uklanski (*1968) also works with stereotypical figures and their reflection. After a preparatory phase in summer 2006 the Polish artist completed his first feature film entitled Summer Love (2006). It treats the subject of the first Polish Western, shot by a local film crew in a remote region of southern Poland. Uklanski make an allegorical film about love with the use of a certain raft of characters, landscape images and other inherently stereotypical motifs from the genre of the Western. The Summer Love (2001) series of photographs form part of the preparatory work which took place in the years prior to the now completed film project. The collage-like ordered photography and the appendant requisite, a Colt belt, play with the genre of images, which are to be found for instance, in advertisements or film covers and correspond to our ideas and expectations. Uklanski utilises the language of the Western and in so doing reflects on the genre as well as tossing out questions on cultural identity and authenticity. The image condenses the application of this method, for the smooth image surfaces should reveal the promises at first glance and represent the film and the genre Pars pro toto.

In many of his works Douglas Gordon (*1966) use the film as a foil and constructs new potentials of perception and translation of film fragments. He uses found materials, which he contextualises anew or manipulates via small interventions. In the three works Bootleg (Bigmouth) (1996), Bootleg (Cramped) (1995) and Bootleg (Stoned) (1995) Gordon uses illegal recordings of concerts, so-called bootlegs. Amateurishly filmed live clips of rock concerts in slow motion are project in large scale on the wall. Leaving out the sound track, the slowing down of the gestures and the insufficient quality for such large scale projection abstracts the moments of ecstasy, endlessly extended by their looped playback. Gordon dissects the phenomenon of the culture of rock music by making the spectator aware of details which are not visible at first glance. The alienation achieved by this abstracts the recognised images and gestures which in slow motion and over large surfaces of colour well nigh disintegrate.