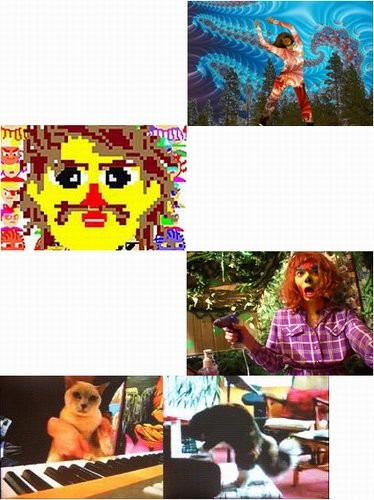 The exhibition - DETERIORATION, THEY SAID - joins four individual projects by younger generation American artists, who all deal with video aesthetics recalling the 1980s and early 1990s in their works, under one title. In their excessively colourful visual spaces they deal with a culture of excess, releasing a veritable deluge of images. In the tradition of experimental film the three investigate positions for the possibility of unconventional narrative paradigms and the disintegration of identity images – in Shana Moulton’s and Ryan Trecartin’s works the artists themselves often appear. In the process questions are persistently posed at a “truth”, or its deconstruction, in the face of the overloaded visual world, and on the observer’s own normalised taste which is also under scrutiny.
The works of Cory Arcangel (born 1978 in Buffalo, lives and works in New York) deal often with the seemingly obsolete. The art works which arise from this recognize no media boundaries – whether they are video installations with outdated home computer games systems, low-tech videos, performances, fake internet sites or computer programs. In the migros museum für gegenwartskunst Arcangel will show his video work A Couple Thousand Short Films about Glenn Gould (2007) in the exhibition context for the first time in Switzerland.
Applying humour in her performances and videos Shana Moulton (born California, 1976, lives and works in New York and California) investigates the interaction of consumption, commercialised new-age philosophies and high cultural art forms such as art nouveau painter Gustav Klimt and the later works of Georgia O’Keefe created in New Mexico – a persistent “migration of forms”, an oscillating of forms between high and low.
The art collective Paper Rad established as a multi-media whole enterprise in 2000 by Jessica Ciocci (born 1976), Jacob Ciocci (born 1977) and Benjamin Jones (born 1977) works in the most varying of media such as video, drawing, wall painting and various lines including fashion, art and photography. Live action film, tape-recorded material from TV, self-drawn comics as well as obsolete technologies of consumer and youth culture converge on one another in an entire spatial staging.
Ryan Trecartin (born Webster, Texas, 1981, lives and works in Philadelphia) creates in his videos, dream-like narratives, which persistently break up classic narrative paradigms by video manipulation, fast cutting and a spill-over of language. Alongside family members and friends the artist himself takes up numerous roles thus extending the films with a performance element. The sculptural work which is a continous collaboration with Lizzie Fitch (*1981 in Bloomington, Indiana) oscillates between amorphity and a narrative and humorous approach.
Cory Arcangel presented his work first time in 2005 in the migros museum für gegenwartskunst, since then many exhibition participations worldwide. Works by Shana Moulton were lately to be seen amongst others at Broadway 1602, New York (2008), Electronic Arts Intermix, New York (2007) and Museo Nacional Centro de Arte Reina Sofía, Madrid (2007). Similarly works by Paper Rad were exhibited amongst others at Foxy Productions, New York (2006), in the Deste Foundation, Athens (2006) and New Museum, New York (2005). As were works by Ryan Trecartin & Lizzie Fitch at the exhibition Between Two Deaths, ZKM Karlsruhe (2007), the Whitney Biennial (2006) and The Moore Space (2006).
The exhibition in the migros museum für gegenwartskunst is curated by Raphael Gygax.
www.migrosmuseum.ch