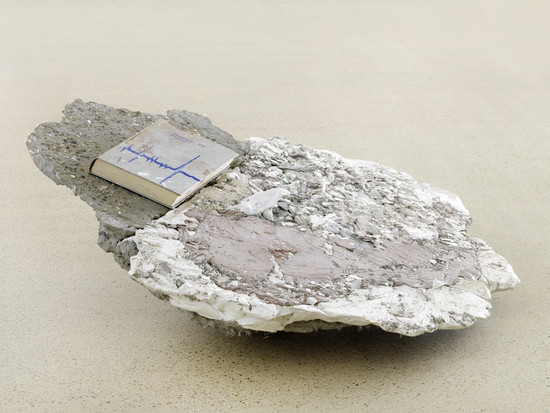 Art has always been the sensorium of the fragile, brittle and porous of the human. In this group exhibition, however, human fracture lines are not treated directly in terms of the human body, but instead by using architecture as a surrogate. The fractures and interfaces of buildings form metaphors for the breaks in human existence. The term “Displaced Fractures” derives from the medical world, and describes a phenomenon whereby bone fractures reveal themselves in other places than the major stress site. The term “displacement” is also used in psychology. In the new spaces of the migros museum für gegenwartskunst, installations, spatial interventions and sculptures working with the displacement of symptoms are given prominence. What dominates here is the area of tension between the refusal of form and monumental creations, between subjective and formal, rational gestures.

In an analogy to the notion of “Displaced Fractures,” projection surfaces are rendered on the building which, in spite of its stability, is subject to temporality, and an opening up to questions of its existential orientation and existence. Through such actions on this alleged fixedness, the discourse on sculpture demonstrates the precariousness of the present and makes it palpable. In works exhibited by artists such as Klaus Winicher or Phyllida Barlow, the formless, already posited by Rosalind Krauss and Yves Alain Bois as a synonym for that which is repressed, is elaborated upon in material and form. As the work of Oscar Tuazon and Kilian Rüthemann shows, it is not alienation that is thematized here, but instead the impossibility of bringing the modulations of the building’s fracture lines and the unruly ability to live to expression. Lifeless material becomes a metaphor for the body, as Klara Lidén’s work shows, whether in cautious construction or spontaneous collapse. The works exhibit the structures of the architectonic exactly like personal traces. They are precise attitudes in which the formal culmination materializes, as Emilie Ding’s concrete support structures or Ulrich Rückriem’s stone cuboids testify. The dynamic application of colors and the use of free forms make these subjective interventions particularly distinctive. They bear witness to the presence of the human and ultimately, through free and defiant handling, signify the vulnerability of the present and of memory.
www.migrosmuseum.ch