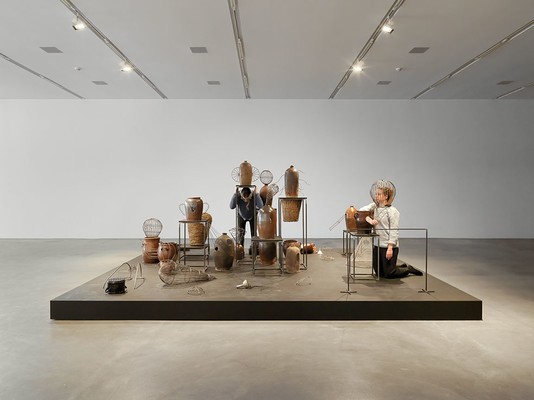 For Eva Kot’átková (b. 1982, Prague), issues pertaining to the construction of societal norms, modes of behaviour and control mechanisms are central to her work as an artist. As part of the anniversary exhibition 20 – An Exhibition in Three Acts, the Migros Museum für Gegenwartskunst is to exhibit Kot’átková's Collection of Suppressed Voices (2014), an installation that simultaneously serves as a stage area. As the work's title already implies, the artist poetically presents a "collection of suppressed voices", which are represented by various ceramics and activated by a performance. Here, Kot’átková establishes a thematic link to the discourse on biopolitics, as informed, for instance, by Michel Foucault or Giorgio Agamben. Foucault introduced this concept in his book The Will to Knowledge (1976), in which he described the tendency of the modern state to control the human body more and more, and to bring in a wide variety of disciplinary techniques for this purpose. Kot’átková's work can be read as a response to this, which on the basis of "bodies and objects, gives rise to something new and deals with identities in new ways". This piece from the collection is presented for the first time in Switzerland as a three-day interlude.
www.migrosmuseum.ch