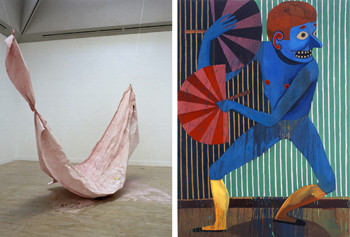 The migros museum für gegenwartskunst is presenting the work of Scottish artist Karla Black (born 1972 in Alexandria, lives and works in Glasgow) in her first solo exhibition in Switzerland. Plaster, chalk dust and Vaseline, or substances such as face powder, lipstick and nail varnish make up Black’s raw materials. The ephemeral works – whether transparent cellophane arranged sculpturally to hang from the ceiling, or fragile works of gossamer-fine powder sprinkled onto the floor – present references to the Minimal Art and Conceptual Art of the 1960s and 1970s. Black simultaneously extends the classical notion of sculpture through a process-oriented, performative handling of cultural connotations and untypical materials. Not only does she create an oppositional model to the brute effect of Minimal Art, but through the use of unstable and simple substances she ties into the history of antiform, begun for instance by Robert Morris in his use of felt, or Eva Hesse in her deployment of latex.
The migros museum für gegenwartskunst is presenting the painter Christoph Ruckhäberle (born 1972 in Pfaffenhofen, lives and works in Leipzig) in his first solo exhibition in Switzerland. The visual world of Ruckhäberle, who studied animated film at the California Institute of the Arts before his studies at the Academy of Visual Arts Leipzig, is peopled by odd hard-edged figures, standing in front of coloured rhythmic backgrounds. Colourful drawings of faces recall carved masks, composed from a rich and playful vocabulary of forms. These forms, and the wealth of colours in Ruckhäberle’s works, are broken not only by skewed visual angles or perspectival inconsistencies, but also through the use of expressionist and surreal borrowings.
Lately works by Karla Black were to be seen amongst others at the Brussels Biennial (2008), in exhibitions such as Strange Solution, Art Now, Tate Britain, London (2008) and Poor Thing, Kunsthalle Basel (2007). Christoph Ruckhäberle’s works have been on display amongst others at Manifesta 7 (2008), and in the Triumph of Painting, Saatchi Collection, London (2006) and Life After Death: New Leipzig Paintings from the Rubell Family Collection, Frye Art Museum, Seattle (2008) exhibitions. The exhibition in the migros museum für gegenwartskunst is curated by Heike Munder.
www.migrosmuseum.ch