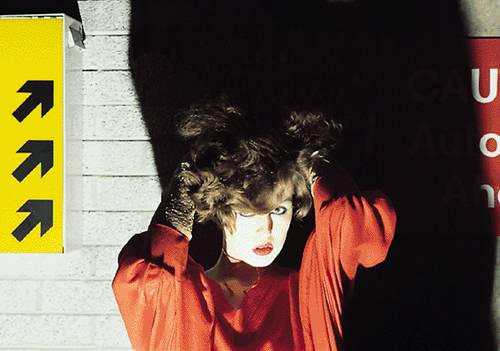 The legendary cover of the New Order single Blue Monday (1983) and, for example, the cover of the Joy Division album Unknown Pleasures (1979), were to bring the Manchester graphic designer Peter Saville (born 1955) worldwide renown. In this solo exhibition at the migros museum für gegenwartskunst, his archive is being fully opened to the public for the first time to reveal three decades of work. Using a reduced, Modernist style Peter Saville has made key innovations in the field of visual communications, and in recent times he has had a profound effect on the interplay between art, design and advertising.

Peter Saville studied Graphic Design at Manchester Polytechnic from 1974 to 1978. Alongside his obsession with the music of Roxy Music and Kraftwerk, and with the photography of Helmut Newton and Guy Bourdin, the book Pioneers of Modern Typography by Herbert Spencer (1969) and the manifesto Die Neue Typographie by Jan Tschichold (1927) were the most important influences on Saville at that time. They remain, even today, standard works on typography. Saville’s friendship with fellow student Malcolm Garrett, who had begun designing album covers for the Buzzcocks in 1976, was also of great significance. Unusual for the time, however, was Saville’s insistence on recalling a historical consciousness of graphic design. His concern to present products graphically, and thus permit the flow of a visual “Zeitgeist” ran in blatant contradiction to the established teaching methods of the institutions, steeped in the spirit of the 1970s, which regarded graphic communication as time and context free.

In the Granada Television studios in 1978, Peter Saville made the acquaintance of TV journalist Tony Wilson. Shortly afterward Wilson arranged Saville’s first contract for him, a poster for his alternative Factory Club in Manchester, which opened for an evening once a fortnight. In the same year Saville and Wilson founded, along with Alan Erasmus, the record company Factory Records – a label that came to epitomise the independent scene. With the collaboration of Rob Gretton, manager of Joy Division and New Order and music producer Martin Hannet, who both became partners of Factory Records, they produced the unmistakeable visual image of the records released under that label. Saville created a new style with the covers for Joy Division, from which New Order were later to emerge, which made him famous. This style distinguished itself by a down-to-earth, “post” modern appearance that played with various image categories and historical sources, functioning as a sublimation of signs. Design came so much to the fore in these album covers that it lent the product a high intrinsic aesthetic value, freed from economic conditions and buyer’s wishes.

In 1979, Peter Saville moved to London, where he was the art director at Din Disc, which later became a subsidiary of the Virgin Group. During this time he designed album covers for various musicians like Roxy Music and OMD. After the dissolution of Din Disc in 1982, Saville established, with designer Brett Wickens and photographer Trevor Key, his own studio, Peter Saville Associates (PSA), through which he achieved further avant garde fame in the graphic design world. As well as his ongoing activity in the music business, he worked with the photographer Nick Knight, who in 1986/87 had begun to take on work for the Japanese fashion designer Yohji Yamamoto, with art director Marc Ascoli. Later Saville worked with fashion labels such as Alexander McQueen, Givenchy, Dior, Stella McCartney, and Raf Simons, who used Saville’s Factory archive for his 2003 summer collection. In the field of visual communications Peter Saville extended his clientele to include companies such as CNN and Adobe Systems, and he is now acting as the creative director of his home city of Manchester.

Saville has also been influential in the art scene, evidenced in the 1980s, amongst other things, by his design for art institutions such as the Fruitmarket Gallery and the Whitechapel Gallery. Artists such as Julian Schnabel and Robert Longo have appropriated details from Saville’s album covers. At the beginning of the 1990s his “cool design” made a lasting impression on the art of the YBA (Young British Artists), for instance on Sarah Morris and Darren Almond, and so Peter Saville influenced a generation of Pop culture. The fields of fine arts, fashion, graphics, music and design are, contrary to general opinion, not separate from one another; but are rather individual fields that influence and inspire each another. In the late 1970s, and particularly in the 1980s, Peter Saville demonstrated this perfectly, and he has made the enriching graphic design element of this constellation fruitful to this day.

Through his work he has impressed a Pop culture that sees itself as the dissolution of the emotionally charged, hippy fashion, proclaiming a strong emphasis on the superficial and a “cold” style. In the early 1980s, Pop was celebrated as a subculture for cool, middle-class teens. Today it is an integral part of our everyday visual culture.
www.migrosmuseum.ch