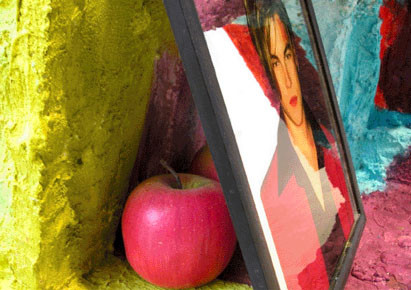 New York artist Rachel Harrison (*1966) combines cultural detritus with handmade objects that integrate and intervene with each other within mixed media sculptures and installations. Despite their playfulness, they exhibit a strong reference to traditional themes and media of the 20th century, such as sculpture. The artist cautiously poses questions about the space, plinth, material, and possibilities for the contemplation of monolithic works, which have been ousted within the contemporary cultural activity of the installation. She situates her work within the tradition of self-reflexive art, which examines its own possibilities and limitations. The migros museum für gegenwartskunst will present an installation of sculptures produced on site, together with other recent objects and photographs of sculptures that refer to Charles Darwin’s The Voyage of the Beagle.

With the work of 20th century artists such as Henry Moore (1898-1986) and Alberto Giacometti (1901-1966), sculpture appeared to have reached the limit of its historical development. An art that increasingly placed the spectator at the centre could no longer work with objects on a pedestal, with monumental claims, or with abstraction. The self-reflection of sculptural minimalism in the 1960s, characteristic of artists such as Donald Judd (1928-1994), fell victim to critical considerations about the White Cube and, replacing a dropped sculpture, the all-embracing room installation made its entrance. The promise of greater autonomy for the work, and the emphasis on the spectator’s position in the media of installation became far more alluring with the arrival of the semiotic or “open work” of Umberto Eco than they had been within the context of tradition-loaded sculpture.

However, there are still artists such as Isa Genzken (*1948) and Franz West (*1947), who, like Rachel Harrison, juggle with art history and extend their work between the media of installation and sculpture. The issues they address represent a continuation of the history of sculpture: how does one place an autonomous object in a space? And how is it possible to record ruptures, exorbitance and saturation rather than reduction and abstraction? One could also point to the attempts to break out from the abstract art of the 1950s/1960s, like those by Robert Rauschenberg (*1925) in his combine paintings, which follow comparable strategies of melding once again with abstract art while also aiming to trace lived reality. In Harrison’s work certain similarities can be seen with the Pop Art of the 1950s/1960s and with the work of Andy Warhol (1928-1987). Among other things, they too brought elements of consumer culture into art, activated discussion on high and low culture, and concerned themselves with critical appendages in art, which has since, responding to accusations of being insitution and commodity driven, taken pains to sustain its own vision of potential conditions.

Rachel Harrison’s works combine objets trouvés, such as photographs, paintings or cheap figures of trivial culture, with handmade and painted elements, and concern themselves less with a fusion of the individual elements than with securing a stage on which both are given equal attention. What is at play here is the relationship between plinth and sculpture, painting and room object, observer and observed. In these new works on view at migros museum für gegenwartskunst, the artist’s titles refer to well-known historical figures and celebrities, arousing the expectation of narrative in abstract sculpture. The sculptures display mass-produced objects like earrings, pictures or beverage cans. Harrison’s figures appear to offer possible solutions to the question posed therein on the possibilities of contemporary sculpture: “Like this perhaps?”

With the emphatic inclusion of objects and figures that have not yet taken their leave of popular culture, Harrison comments humorously on the mostly arbitrary borders between high and pop culture. Rather as Marcel Proust asserts that the museum is the place in which art works can be positioned ideal-typically to one another, Harrison’s sculptures unify the cultural products of an age. These exhibits were displayed in 2006 at the Berlin Biennial, in 2005 at the Transmission Gallery in Glasgow, in 2004 at the Camden Art Centre in London, and in 2003 at the Venice Biennial.

For further information please contact the curator of the exhibition, Heike Munder.
www.migrosmuseum.ch