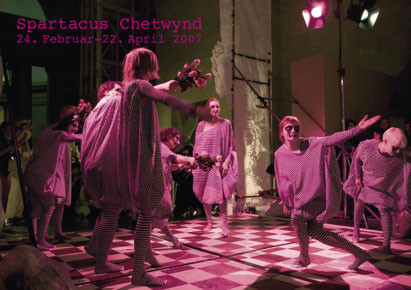 The British artist Spartacus Chetwynd, also known as Lali Chetwynd (born 1973, in London where she now lives and works), has become known for her baroque and surreal performances, which are charged with humorous image quotations from art history, melded with pop culture references. In the performance An Evening with Jabba the Hutt (2003) Chetwynd gives centre stage to the figure and merciless slave trader from the film series Star Wars (1977/1980/1983), and gives him the chance to repair his sleazy reputation by hosting a night on world politics. In the tradition of the grotesque, she combines elements from Giotto’s frescoes, characters from Hieronymus Bosch, or Yves Klein’s Anthropometries (1960) with heavy metal music, Michael Jackson’s music video Thriller (1984), or the 1980s TV series The Incredible Hulk. Chetwynd will present a new installative performance production for the migros museum für gegenwartskunst.

Chetwynd’s artistic praxis is moulded by her appropriation of alien sources, and the works never rest upon a single aesthetic image source. Her references are manifold, nourished by both high and low culture. She quotes and combines the most diverse sources and cultural levels, and in this way creates complex reference systems. For instance, in one of Chetwynd’s performances, the character Cousin Itt from the 1960s TV series The Addams Family, a being covered in hair from head to toe, was allowed to give a guided tour in Liverpool’s Walker Gallery on the Romantic painter George Stubbs in his artificial squeaky language, while the artist herself simultaneously translated fragments. In this case, Chetwynd, who obtained a B.A. in Anthropology, not only creates an absurd comic situation, she also investigates the construction of culture according to the ethnology and anthropology of Claude Lévi-Strauss (*1908). The work strategy of Bricolage is of great importance to the artist not only at the content level, but for the formal making of her sculptures and Props. The term Bricolage is not to be understood here in its traditional artistic context, but in terms of Lévi-Strauss’ famous work La Pensée Sauvage (1962) (inadequately translated into English as The Savage Mind), as a process through which the object is transformed into a specific socio-cultural connotation of a social stratum, and thus contributes to a new cultural identity. The term also implies that there is no prefabricated formal instrument available, but rather an explicit propensity to experiment – therefore the “savage thought” is a physical function, which is (still) not ruled by rational-analytical, but arguably by combinatory faculties.

Alongside the principle of Bricolage, the individual amateur actors in the performance provide a genuine moment. In the absence of a classical script and a fixed structure, Chetwynd attempts to open a self-reflexive role relationship – she offers the performers merely pivotal points in the content, which roughly structure the development of the performance. This consciously amateur aspect of her performances links them on the one hand to medieval mystery and festival plays, and on the other to the tradition of travelling theatres, which were often characterised by their grotesque and spectacular nature, and feature precisely because their forms have not emerged from the tradition of bourgeois theatre in the classical sense. For each performance Chetwynd made a programme – listing the original sources, image materials and legends – which is to be understood as an integral part of the whole.

Alongside her performances Chetwynd, who graduated from the Royal College of Art with an M.A. in painting, creates small-scale canvases. In her pictorial series Bat Opera (2004-), the title of which is another quote from pop culture, she presents compositions of bat swarms, borrowing from Romanticist painting – the atmosphere recalls the pictorial world of Tiepolo and Canaleto. The exhibition as a composition situated in the migros museum für gegenwartskunst, links the sculptural, painterly, film and stage elements of Chetwynd’s work into a complex hybrid.

“Spartacus Chetwynd presents a Lali Chetwynd Production. Made completely by Humanzees specially trained in the theatre trade. Also featuring Bonobos and Chimpanzees. Giotto’s Play is a Play within a Play.”
www.migrosmuseum.ch