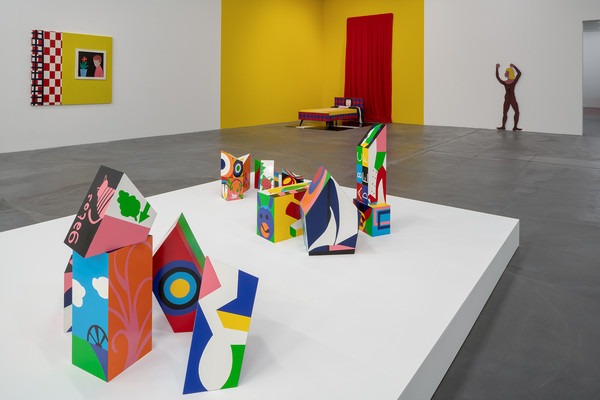 Teresa Burga: Aleatory Structures, installation view at Migros Museum für Gegenwartskunst, photo: Lorenzo Pusterla
Since the 1960s, the Peruvian artist Teresa Burga (b. Iquitos, Peru, 1935) has created works that constitute a fine-grained record of the social realities of her time. Her extensive oeuvre encompasses Pop Art-style paintings and environments as well as conceptual drawings and objects and cybernetic installations. The unifying constant in the artist’s formally and aesthetically diverse output in a wide range of media is her insistent endeavor to visualize complex social structures, but also the individual’s capacity for practical self-determination. The latter, Burga argues, is inextricably bound up with the exchange of information and an understanding of its contexts. As a female exponent of Latin American art, Burga was often ahead of her time in her creative practice. Due to the political situation in her native Peru, which long suffered under a military dictatorship and struggled with economic crises, she worked largely in isolation from the local and international arts scenes. The comprehensive retrospective Teresa Burga: Aleatory Structures at the Migros Museum für Gegenwartskunst is the artist’s first solo exhibition in Switzerland.

Like many other women artists of the 1960s and 1970s, Burga examines patriarchal social structures that constrain the lives of women and inquires into possible avenues of female empowerment within the system. Yet where her contemporaries in the United States and Europe celebrate their own bodies in a show of newfound confidence and strength, a strategy meant to enhance women’s presence in the public sphere, Burga’s Pop Art paintings and environments present female figures who remain excluded from such self-determination: prostitutes, solitary women in the streets or in domestic settings from which they gaze out into public spaces even as they are barred from active participation in them. Her pictures of women underscore how vast the social distance and imbalance of power between the sexes remains in everyday life. A similar disparity characterizes relations between Peru’s various ethnic groups: although the Peruvian arts scene of the 1970s and 1980s repeatedly adapts stylistic features of indigenous craftsmanship, the native peoples of the Andes remain marginalized, a social inequity that is a legacy of the colonial era. They do not gain access, and certainly are not invited to contribute, to the country’s high culture, in which European influences are still dominant. Burga addresses this persistent divide in her most recent series: the market drawings from the years 2016–17 and the drawings of traditional Peruvian attires from 2017.

One question that always resonates in Burga’s work concerns the influence that pictures have over our perception of reality. Between 1974 and 1978, she drew copies of magazine covers and newspaper and magazine clippings showing public appearances of women. The manual translation of mechanically reproduced images, which highlights the significance of mass media (the press and television) as sources of information, is a device the artist revisited in a series of newspaper excerpts created in 2012–14. The transfer of information into the art context also defines the installation Autorretrato. Estructura. Informe. 9.6.72 (“Self-Portrait. Structure. Report. 9.6.72,” 1972), for which Burga recruited medical assistance and submitted to a detailed physiological examination. The work turns the artist’s body into the object of a compilation of analytical data— art engages science in a dialogue in which medical information yields her quantitative portrait—to point out that the female body is subject to criteria of profiling and assessment that not only con- trol the individual’s latitude for action but also serve as a leverage point for social restrictions. A similar set of phenomena is the subject of Perfil de la Mujer Peruana (“Profile of the Peruvian Woman,” 1980–81). In collaboration with the psychologist Marie-France Cathelat, Burga created an ensemble of works based on the data of over a hundred anonymous Peruvian middle-class women. The sociological study of their role and the opportunities they see to participate in their country’s social—and political—life again exposes their profoundly unequal treatment by society. Precise analytical observation underlies Burga’s creative practice, forming the basis for works that may seem playful at first but soon reveal themselves to be critical reflections on existing social realities and challenge the viewer to take a stance and confront entrenched structures. Meanwhile, the artist is acutely aware that she cannot control the effect her art will have on its audience: as the title Aleatory Structures suggests, she regards her works as impulses whose repercussions are unpredictable and shaped by contingencies.

The exhibition is curated by Heike Munder (director, Migros Museum für Gegenwartskunst). In conjunction with the opening, JRP|Ringier will publish a monograph with an introduction by Heike Munder and essays by Dorota Biczel, Julieta González, Kalliopi Minioudaki, Cristiana Tejo, and Jorge Villacorta as well as an interview with Teresa Burga by Miguel A. López. The exhibition and catalogue are produced in cooperation with the Kestner Gesellschaft, Hannover.