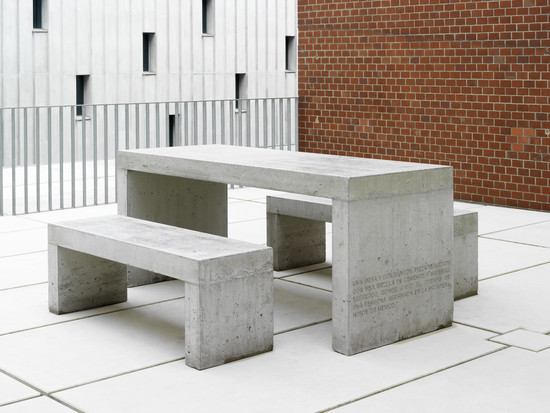 Teresa Margolles
Mesa y dos bancos, 2013
Made from a mixture of cement and material taken from the ground, on which there lay the body of a person murdered at the northern Mexican border.
Table: 85 x 80 x 200 cm , benches: 50 x 45 x 140 cm each
Stefan Altenburger Photography, Zurich © the artist
TERESA MARGOLLES
La búsqueda
24 May – 17 August 2014

The works by Mexican artist Teresa Margolles (b. 1963, Culiacán) revolve around themes such as death, violence and social exclusion. Since the start of the 1990s, she has also worked in the forensic medicine department of an autopsy facility in Mexico City, where numerous, mostly anonymous, victims of violent crime are brought in on a daily basis. Her works, which adhere to a minimalist approach, are produced against this societal backdrop. Since 2005, this artist has mainly examined the extreme violence in the northern Mexican border city of Ciudad Juárez and the drug war that is raging there. Also for her first institutional solo exhibition in Switzerland, Margolles is addressing Ciudad Juárez as a place of crime. At the center is a mysterious series of female homicides that has been ongoing since the start of the 1990s. Here, Margolles is primarily interested in the traces that the brutal crimes leave behind on architectures, and how these shape people's everyday lives. By transposing such traces into an exhibition space, the artist generates a charged interplay between mundane presentation and grim realism.
www.migrosmuseum.ch