While Bodies Get Mirrored 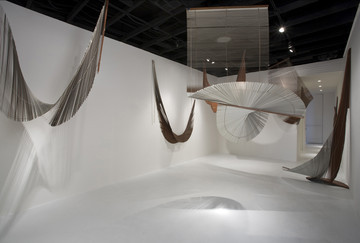 WHILE BODIES GET MIRRORED
An Exhibition about Movement, Formalism and Space

The exhibition gathers works together that create a relationship of tension between movement andspace and in so doing take on and reactivate a formalist vocabulary of signs. Another central question raised is brought about by the re-presentation of the performative and the notation of movement and dance-like actions – above all in terms of the sculptural and installative. As a result there is a sharp focus on postmodern dance and choreography in contemporary art. Early postmodern dance – and its claim that “every movement is part of a dance and every person is a dancer” postulates that everyday movements can be read as an historical bridging moments. In this manner the inheritance of formalist expressions of movement pertaining to modernity have been further developed and investigated in reaction to contemporary visual art. The last few years has registered an intensified interest on the part of younger artists in replaying and discovering the avant-garde movements of the early 20th century – both from a formal aesthetic perspective as well as a social one. Here the formal aesthetic moments of mirroring, reflecting, coruscating and the dissection of complex forms in their simple, geometric components have once again become important means of expression of this language.

The exhibition is curated by Raphael Gygax and Heike Munder. In affiliation with the exhibition, in June 2010, an extensive anthology entitled Zwischenzonen (Between Zones) is to appear which draws together the current exhibition as well as the Interwoven Echoes Drip into a Hybrid Body – An Exhibition about Sound, Performance and Sculpture exhibition of 2006. At the centre of this discussion is the intersection and folding into one another of the category installation and the performative with various fields of art.
www.migrosmuseum.ch