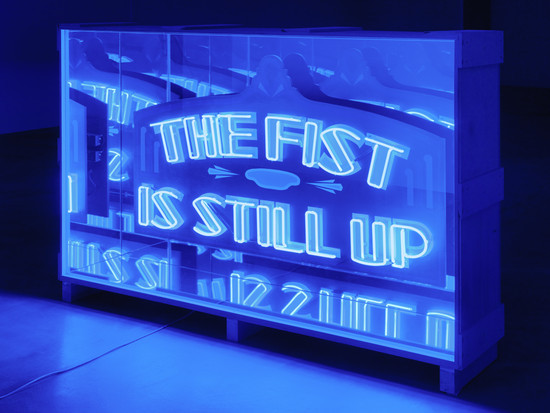 Wu Tsang (b. 1982) is an artist, performer, and filmmaker based in Los Angeles (USA). His multimedia-oriented oeuvre focuses on narratives that construct identity and the self in relation to others. In particular, Tsang is interested in the socio-political dimensions of communities and is also significantly inspired by his involvement with queer, trans, and immigrant communities in Los Angeles. Evoking “the underground” as a site of cultural resistance, Tsang considers how fantasy can play an important role in representing social movements. For instance, his award-winning 2012 film Wildness documents a legendary party venue in Los Angeles, which has been a popular meeting point for the Latin American transgender community for decades. Through magical realism and personal narrative, the film invites discussion of documentary strategies and societal circumstances. Wu Tsang's first institutional solo exhibition in Europe brings together works from the years 2008 to 2014.

At the heart of Tsang's work is his investment in understanding the relational gap between self and others. He often works collaboratively, as a way to insist upon a language that is not solely his own; his works bear the "marks" of many creators, or speak from many points of view. This process is often tied to questioning gender norms, through tracing the historical continuities and fissures within identity politics. Those early debates were initiated by Judith Butler’s groundbreaking 1990 work Gender Trouble, in which she hypothesizes that gender identity is reinforced, as well as constructed, by a kind of ritualistic subconscious repetition of predominant ideas about its content, and that these conceptions can thus be changed by a disruption or adjustment of this performative act. In his work, Tsang makes various attempts at such a deconstruction, and also explores how this analysis shifts through the act of performance itself.

In connection with his work on Wildness, several short films and installations were produced. From these early works, the 2008 video The Shape of a Right Statement will be shown, in which Tsang raises the questions of who is seen as a "real" person and a member of society, and the role that language plays in this process. The 16 mm film work For how we perceived a life (Take 3) from 2012 explores the dissonances that resonate with regard to every form of cultural, social or political representation, particularly in the documentary film genre. In both works, Tsang uses a theatrical performance technique that simulates a break in the unit of body and voice, of the speaker and the spoken. Two works that play with the methods of narrative cinema constitute a central point in the exhibition. Tsang's video installation DAMELO TODO // ODOT OLEMAD (2010/2014) is about the young refugee Teódulo Mejía who, at the age of 15, comes from El Salvador to Los Angeles, where he finds a new home at the bar Silver Platter. Here, Tsang combines fictitious and documentary elements, transforming the museum into a hybrid place, where formal, conceptual and physical prerequisites for the creation of "safe spaces" are reflected. Tsang's most recent exhibited piece, A day in the life of bliss (2014), uses the visual language and conventions of the science-fiction genre to focus on identity constructions in the digital age. In this work, the American performance artist boychild plays the main role.

Wu Tsang's works have been presented at the Tate Modern (London), the Stedelijk Museum (Amsterdam), at the Whitney Museum, the Museum of Modern Art and the New Museum (New York), the MCA (Chicago), and MOCA (Los Angeles). In 2012, Tsang took part in the Whitney Biennial and the New Museum Triennial (New York), the Gwangju Biennial (South Korea) and the Liverpool Biennial (Great Britain). His documentary film Wildness has received many awards, including the Grand Jury Prize at Outfest 2012.

Wu Tsang's video installation DAMELO TODO // ODOT OLEMAD (2010/2014) combines fictitious and documentary elements to address the construction of "safe spaces" and their function. In one respect, the film is based on a short story by Raquel Gutierrez and on Tsang's experiences in the Latin-American transgender community as organizer of Wildness, a party at the bar Silver Platter. The story told is that of young refugee Teódulo Mejía who, at the age of fifteen, comes from El Salvador to Los Angeles, where he finds a new home (and her transgender self) at Silver Platter. For decades, this establishment has served as a safe haven for (particularly homosexual and transgender) immigrants from Latin America. Tsang repeatedly interrupts his narrative with documentary inserts, until reality ultimately catches up with fiction. Using a combination of projection and mirrors that echo the Silver Platter, Tsang also transforms the museum into a hybrid place, where formal, conceptual, and physical prerequisites for the creation of "safe spaces," particularly the experience of being "outside" vs. "inside" and the supposed "authenticity" of such places are reflected.

In The Shape of a Right Statement (2008), Wu Tsang reenacts Amanda Baggs's 2007 YouTube manifesto In My Language, in which she speaks out in the interests of an understanding, the personhood and the rights of autistic people. Here, rather than merely reciting, he imitates the intonation, pacing, and enunciation of Baggs's computerized voiceover by means of a theatrical performance technique that he describes as "full body quotation." The idea behind this mimicry, which is as precise as possible, is to raise questions about the authenticity and intention of speakers and to enable different readings of the original content via a contextual shift. Tsang's appropriation and embodiment, exploring the linguistic structures behind many forms of discrimination, transforms the initially specific call for autism rights into a multilayered statement, relatable to many "Others."

The 16 mm film loop For how we perceived a life (Take 3), created in 2012, takes as its point of departure Jennie Livingston's influential 1990 documentary Paris Is Burning, which is an intimate portrait of the Harlem "ballroom" scene of the late 1980s. In this underground culture, dominated by people of color, drag competitions serve to satirize common socio-political norms. In the original documentary, these parodies are portrayed as an expression of an escapist desire for a better life envisioned by many along the lines of the glamour of celebrity culture. The film also shows how balls provide the members of different communities with a safe place where they can express their own personalities. Various elements of this underground scene such as "vogueing," which was adapted by Madonna, can still be found in pop culture today. Tsang examines these usurpations, which the protagonists of "ball culture" sometimes regard as exploitation, by making his actors also embody voices that are not their own and instead based on excerpts and outtakes from Livingston's film, in addition to self-researched material. Tsang's twofold appropriation of a subculture explores the dissonant undertones in every form of cultural, social, or political representation. The question ultimately remains: who is able and entitled to speak for whom?

Wu Tsang's 2014 work A day in the life of bliss uses the visual language and conventions of the sciencefiction genre to address the topic of identity construction. In a world conceived by the artist in which our online personas have developed self-awareness and taken over, the camera follows a day in the life of the protagonist BLIS, played by American performance artist boychild. The video installation reflects everyday scenes with dance performances that comment on, and supplement, the events. At the same time, the two-channel projection is duplicated on two large mirrors, so as to convey the different levels of action, between digital and "actual" reality, into the exhibition space. Working with metaphors of physicality, which are interpreted by boychild, Tsang demonstrates the possible consequences of our contemporary understanding of the private sphere and communication. Simultaneously, the androgynous digital alter egos present a future increasingly blending into the present in which social networks allow for the expression of multiple identities and a construction of self through imagery and the performance of social codes.
www.migrosmuseum.ch