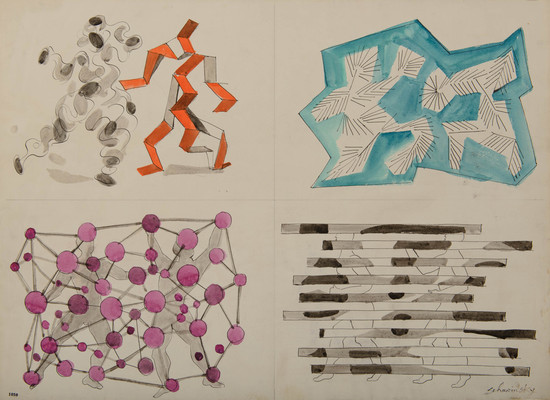 The Migros Museum für Gegenwartskunst presents the first comprehensive retrospective of the oeuvre of the Swiss artist Alexander “Xanti” Schawinsky (born Basel, 1904–died Locarno, 1979). In his lifetime, Schawinsky was mainly known for his work in the theater department at the Bauhaus. In the 1930s, while teaching at Black Mountain College, a legendary art college in North Carolina that provided refuge for many European emigrants during the Nazi era, Schawinsky, building on his Bauhaus work, developed his dramatic theory known as “Spectodrama.” Involving multimedia productions, it represents an early form of the “happening,” which would later be made famous by another affiliate of the same institution, John Cage. Schawinsky’s work as a painter also addresses the dissolution of the medium’s boundaries and focuses on the process, for instance in his Track series, which he “painted” with the aid of a car.

Beyond the avant-garde utopias of the Bauhaus and his proto-happening art, Schawinsky’s oeuvre is linked in many ways to the majory tendencies in European as well as American prewar and postwar 20th-century modernism. His work may thus also be seen as representative of the transatlantic exchange of artistic ideas that was induced by the political situation and had a lasting impact on art history. This exhibition is the first to present the full breadth of Schawinsky’s outstanding oeuvre (which was inaccessible to the public for several decades) and positions it both within a historical context and in relation to its continuing effect on the present.

Schawinsky occupies a prominent position in the history of performance art. Early in his career, at the Bauhaus, he developed avant-garde ideas for a theatrical laboratory that would research universal questions of artistic creation. During his time at Black Mountain College he fleshed out his model of theatrical art, which he labeled Spectodrama, and emerged as a leading representative of an art form that effectively anticipated the happening. Like the pantomimic dances and demonstrations of the Bauhaus stage, Spectodrama—primarily a visual format—developed a distinctive dramatic energy in scenes that explored a theme using the elementary theatrical means of space, shape, color, light, movement, sound, language, and music. It also involved technological innovations like projection and film; some scenes featured pantomimes and dancers, whereas others did away with human actors altogether.

In addition to Schawinsky's Bauhaus and Black Mountain College years, the exhibition highlights the process-based painting that became the artist’s central interest from the 1940s on, a part of his oeuvre that has remained virtually unknown to wider audiences. The retrospective illustrates how the artist translated his ideas about theater and performance art into painting and envisioned the canvas as the scenic space of an unfolding process. In postwar New York, Schawinsky, like his colleagues Jackson Pollock and other pioneers of Abstract Expressionism, experimented with a wide variety of techniques to expand the definition of painting and, for example, focus the act of color application itself as part of the picture.
The Bauhaus years (1924–1929) In the spring of 1924, the twenty-year-old Xanti Schawinsky takes up his studies at the Bauhaus. Paul Klee, Walter Gropius, and László Moholy-Nagy are among his teachers. He soon joins a group around Kurt Schmidt at the theater workshop that is only loosely supervised by the workshop’s director, Oskar Schlemmer. In November 1924, Schawinsky contributes his first stage production to the celebrations of the Bauhaus’s fifth anniversary celebrations, followed by several further theatrical creations. The municipal theater in Zwickau hires him as a set designer for the 1926–27 season. He then returns to Dessau to teach in the theater workshop.
The works on display illustrate the broad range of Schawinsky’s creative output during his time at the Bauhaus: they include scenery and costume designs as well as collages and photographs in which he appears as a central figure of the Bauhaus’s student community. They also already adumbrate prominent themes of his later oeuvre: the question of construction in space and the tension between man and machine.
Black Mountain College (1936–1938) As a consequence of the rapprochement between the Italian fascists and Nazi Germany, Schawinsky, who had fled Germany for Milan and launched a highly successful career as an advertising graphic designer, is forced to leave Italy. His friend Josef Albers invites him to North Carolina’s Black Mountain College. The small school was very receptive to the ideas of European modernism and quickly became a center of the Bauhaus tradition and performance art in the United States. John Cage and Merce Cunningham are among its best-known graduates.
Schawinsky builds on ideas about theatrical space and the stage as an experimental laboratory that he had first sketched in Dessau. Working with students, he creates several productions he calls Spectodramas. The scenic performances explore fundamental theatrical phenomena such as movement, light, sound, color, or space. They involve pantomime and dance as well as a wide range of technological media and draw on ideas from diverse scientific disciplines.

New York Faces (1938–1949) In 1938, Schawinsky moves to New York, where he works as a graphic artist and teaches painting at New York University and City College. A year later, he gains American citizenship and soon starts designing camouflage patterns for the U.S. Army Air Forces. His series Faces of War reflects this professional experience: the pictures show hybrid creatures combining human faces with military equipment. Cheerily colorful and yet unsettling, the man-machines are a direct response to contemporary political events, a rare occurrence in Schawinsky’s art.
A second series from the same period similarly stands in the Bauhaus tradition of blending art and design. The so-called Head Drawings are standalone pieces of graphic art, but some of them also served as templates for print advertisements. The tongue-in-cheek compositions clearly hark back to Giuseppe Arcimboldo’s (1526–1593) organic portraits. They illustrate a recurrent stylistic element in Schawinsky’s figurative work: the human being, a composite of individual features and interchangeable templates, always occupies a central place.

Process-based painting (1949–1979) Beginning in the late 1940s, Schawinsky focuses his energies on his painterly practice. Looking back to his work for the theater, he creates several series in rapid succession that emphasize performative aspects of painting and in which the process of making them is no less important than the finished picture. The underlying idea is the attempt to involve the human body in as many different ways as possible and go beyond the classical range of techniques based on brush, easel, oil paint, and canvas. Some works are the result of dancing on the canvas; for others, the artist drives a car over it. Folding the canvas several times and applying several layers of spray paint, Schawinsky produces the Eclipse series of paintings, which stand out for their almost sculptural appearance. In addition to these experiments, he also explores ways to make pictures without paint, as in the Smoke series, for which he fixes smoke on fiberboard panels.
Beneath the appearance of stylistic discontinuity, Schawinsky’s late oeuvre shares crucial concerns with his earlier work: reflections on the segmentation of surfaces and the body’s role in it as well as the genesis of space remain central to his art.
www.migrosmuseum.ch