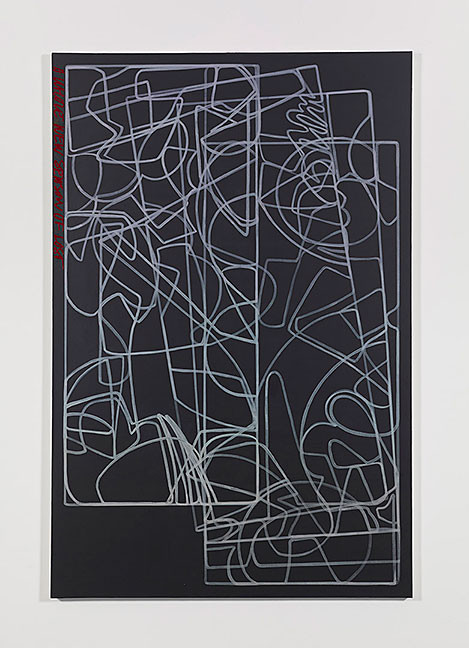 Miguel Abreu Gallery is pleased to announce Blake Rayne’s On Fridays We Have Half Days, openingat the galleryon Friday, May 9th , 2014.

In his fourth solo exhibition at the gallery, Rayne unveilsa sequence of events, or media studies, as he calls them, that build upon a series of recent solo exhibitions including Blake Rayne (2013), Almanac (2013), Wild Country(2012), and This is New York City(2012).

Here, the exhibition begins with an architectural intervention comprised of an amendment to one of the two bookshelves that have been inside the front windows of 36 Orchard Street since the gallery’s inaugural exhibition in 2006. Creating a passage between the gallery’s two locations, the exhibition moves from this deinstallation to a consideration of painting as a spatial practice, materially displacing a series of cinematic terms into a group of at once familiar, yet surprising objects.

For instance, the “dissolve” presents a single work comprised of ten pieces of paper individually dyed with KoolAid, and printed with an adhesive, which, while drying, is dusted with a layer of 7.66 ounces ofwalnut shell powder distributed across the individual prints until exhausted. Turning from the gradually dissolving legibility of the still (a desktop frame grab), the print series is completed by a C-print selected from Rayne’s ever expanding catalogue of iPhone image captures of the transparent glass border between the projection booth and the reflective screen in the cinema, in this case showing popcorn aligned on a narrow cill below it.

This image of an overexposed projection leads to the cinema scene itself, the following room featuring a mobile made of a bicycle frame rescued from a previous show featuring a constellation of prints. Live “culture”, further, is manifested by an upturned bucket of yogurt positioned on a pedestal of stacked rectangular cardboard “files” upon which a 108 minute looped video is projected.

The video loop opens to a composition of ten acrylic and oil paintings, each recording streams of movement and editing like a stuttering shot sequence, or “stop action” animation. The exhibition then concludes with a second architectural amendment to complement the first, an iris-sized shot through one of the gallery’s ten eastwardly facing windows, looking back towards the window alteration on Orchard Street where, along with the films of JeanMarie Straub and Danièle Huillet, Rayne had the inaugural exhibition.
www.miguelabreugallery.com