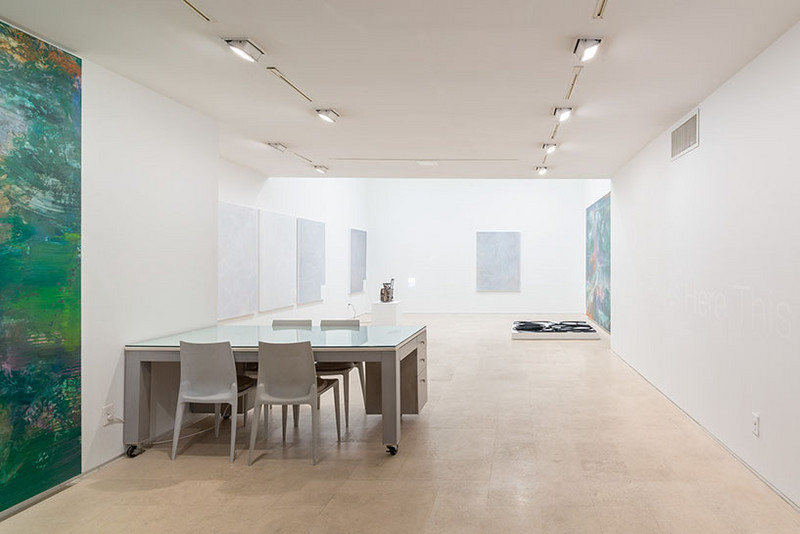 Miguel Abreu Gallery is pleased to announce the opening, on Sunday, May 1st, of These Pellets Here This Powder There, Blake Rayne’s fifth solo exhibition at the gallery. On view at our 36 Orchard Street space, the show is comprised of the following:

3/4 inch wide steel banding designed to be used to secure crates to their pallets during overseas shipments is here unspooled from its coil and employed to form a drawing in the space, made from the front to the back of the gallery. Once established, this drawingis held together by paperclips and compressed into a frame that shares a dimension with the series of paintings that adorn the walls.

A group of 60 x 45 inch paintings are the result of asimilar steel banding drawing, albeit one produced in Rayne’s current Navy Yard studio. The banding was again compressed within a temporary frame around the edges of the paintings and utilized as a soft stencil to create a white looping line lightly dusted with aerated acrylic paint in layers of various colors. The paperclips that initially held the banding together were released to allow for expansion into final shape of each of the line compositions. They now appear as silhouettes, while 8 1/2 x 11 inch US letter-sized portions of the white canvas are left exposed, containingshort texts traced in graphite.

The gallery desk, having been rotated 90o and moved from its usual position to the adjacent wall, such that it appears to be a pier extending out into the gallery, is covered by a sheet of thick glass, straddling the divide between a museum vitrine on the one hand, and, on the other, a bar.

The name of the exhibition, spelled out in Helvetica, is painted in glossy acrylic polymer on the gallery wall with the use of a vinyl stencil, disappearing into the wall and visible only in raking light.

The gallery shelves, cleared of most of their content, will display several copies of Rayne’s Gangs of New York City artist’s book zip tied together so that only one copy is perusable. The book itself juxtaposes historical images of New York City police uniforms with drawings made with the fat Rayne collected from his semi-regular pig roasts at his former studio.

A looping 6 minute film, transferred from video to 16mm, will project against the wall. Entitled La Libertad, after the municipality on the coast of El Salvador where it was shot, the film depicts a sounder of pigs at the beach, eating clams.

For Rayne, painting is not only to be defined through its material components, it also existsas a fleetingsign that requires testing, stretching,and constant reassessment so as to remain alive in permanently renewed cultural circumstances. Taken together, the works in this compact exhibition, which expand from drawing to sculpture, performance to painting, and film to scenography, demonstrate Rayne’s ambivalent, constantly reimagined and dynamic relationship towards the medium of painting, while also recalling the constituent parts of the gallery’s inaugural exhibition ten years ago, Empedocles/Hölderlin, Cézanne/Gasquet, Straub/Huillet, Dominique Païni & Blake Rayne: two films, one text & paintings.

Jean-Marie Straub and Danièle Huillet, Films and Their Sites, is simultaneously on view at 88 Eldridge Street.
www.miguelabreugallery.com