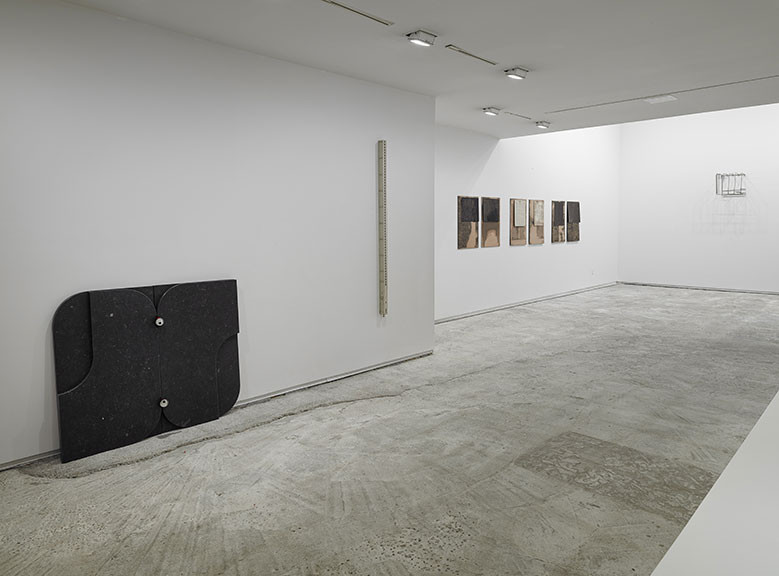 Martin Heidegger suggests that all materials refer to the ‘towards-which' of their usability and the ‘whereof' of their source. But how might a shift in context alter this relationship, if only provisionally?

Conspicuous Unusableexploresthis question through workcomprised of industrialand commercialmaterialswith an ambiguous relationship to authorship. Several of the exhibited artists seem indifferent as to whether their work is identifiable as art. Removed from a utilitarian context, and altered in often subtle ways, the ‘whereof' of these works remains legible while their ‘towards-which' is transmuted.

Use, Heidegger writes, has its own kind of sight. It sets up a specific relationship between materials through their assignment to given tasks. This instrumental relation—a ‘something-in-order-to’—is constitutive of an object, which only reveals itself through use. “Equipment can genuinely show itself only in dealings cut to its own measure,” he states. A hammer is used for hammering, a clock tells thetime, a shoe is worn, and so forth.

However, under certain circumstances, an object becomes unusable; only then does its assignment to a given task become explicit. Heidegger outlines three types of unusability: when a tool is damaged or material is unsuitable, it becomes conspicuous; when a necessary item is missing, everything on hand becomes obtrusive; when something impedes the execution of a task, it becomes obstinate. He writes: “In conspicuousness, obtrusiveness, obstinacy, that which is ready-to-hand loses its readiness-to-hand in a certain way....It does not vanish simply, but takes its farewell, as it were, in the conspicuousness of the unusable."

In this group exhibition, the notion of excess is doubly engaged: cast-off materials constitute the excess of a productive process, while unused industrial materials—rerouted from a context in which they might be instrumentalized for utilitarian ends—are rendered excessive in another sense. The work is a product of corrupted or diverted seriality; it demonstrates a concern for form that does not give way to formalism.

Temporality is foregrounded. The workgestures backward,toward the context from which it came, and forward,toward the possibility of reintegration into other cycles of use or neglect. At the same time, itinflects—and isinflected by—the history and materiality of the site in which it isinstalled. The space’s distinctive structural features index its prior tenants, a dumpling shop and a Buddhist temple. Both the tile floor and the recessed ceiling are implicated by the exhibited work.

The context of the Lower East Side, where longstanding industrial and commercial activities are held in uneasy tension with more recent transplants, is also significant. On its sidewalks, byproducts of the former are joined by the detritus of the seemingly perpetual state of renovation catalyzed by the latter. Both thematerials and their context are remindersthat transformation and use are always precarious, provisional, contingent.
www.miguelabreugallery.com