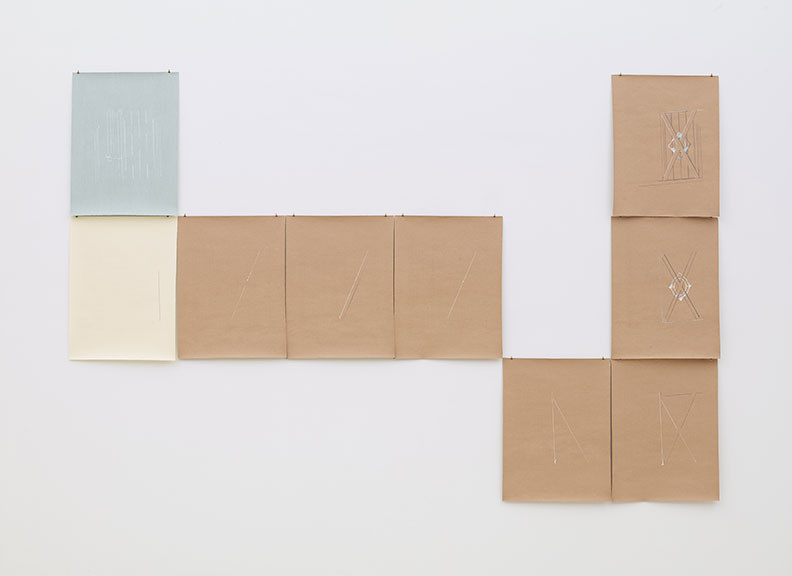 Miguel Abreu Gallery is pleased to announce the opening, on Sunday, January 12, 2014, of Dustin Hodges’s Late Stick Style, his first solo exhibition and first show at the gallery.

The title of the show refers to a fictional “late” moment of a 19th century tendency in American wood architecture. Vincent Scully’s The Shingle Style and The Stick Style chronicles the theory and building of a semi-authorless vernacular, dominated by theorists and pattern books for domestic builders. The Stick Style designates a loose agglomeration of ideas, values, tendencies—a program developed in opposition to the circulation of historical styles and motifs, in contradistinction to architecture as icon and image. This proto-modernist aesthetic program prescribed “expression of structure” as its guiding principle. Striking patterns created by the repetition of vertical, horizontal, and diagonal elements on the outside of the building allude to the organization of the interior and its frame, making Stick Style an important precursor to the drive towards transparency in 20th century Modernist design.

A particularly baroque example of the Stick tendency built about twenty years after the style’s period of real innovation provides the schema for a series of drawings that mediate between photographic documentation of the “Bassett House” in New Haven, the grid of axonometric projection, and the tools and materials of drawing.

Further reference to architecture will be on display in the form of a kiosk Hodges constructed, the outside walls of which are made of freehand observational paintings of houseplants on canvas. On view will also be a series of “Ruler Drawings,” following the logic and precision of architectural drawings, and “Oyster Style Drawings” that are calligraphic and expressive in nature. Shells, pipes, and teapots appear in the form of loose, gestural marks, while “oyster style” implies the fluid presence of the body or hand, and opens the possibility of narrative. The opposition between the two modes elucidates the contradiction between rationalism and expressionism in modernism, and produces the basic tension in the exhibition and in Hodges’s work to date.

Dustin Hodges received his M.F.A. from the Milton Avery Graduate School of the Arts at Bard College in 2012. He also received a B.A. from Harvard University (2006) and attended the Staatliche Hochschule für Bildende Künste Städelschule in Frankfurt am Main (2007).
www.miguelabreugallery.com