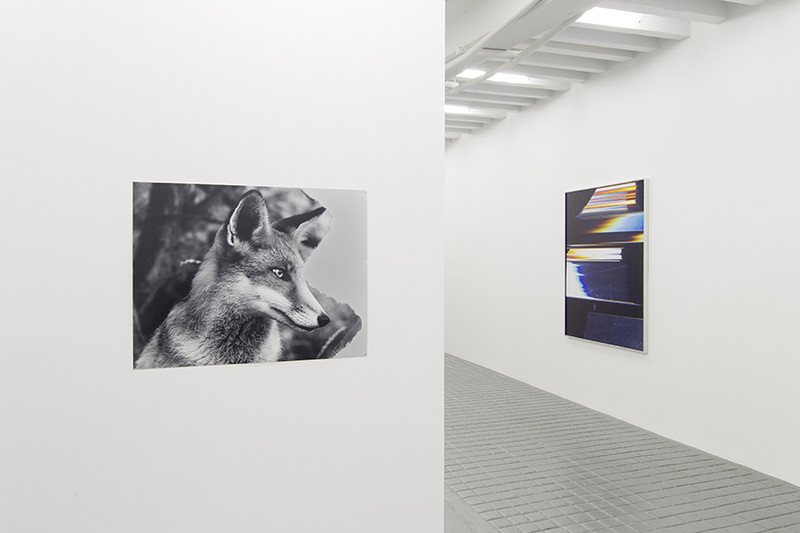 In Mind Craft, Eileen Quinlan’s fourth solo exhibition at Miguel Abreu Gallery, the artist continues her move towards the articulation of a heterogeneous regime of the image, through a literal and symbolic investigation of the screen.

In Quinlan’s previous gallery exhibition, Curtains, figurative, abstract, and imageless black and white photographic negatives were degraded by the development process itself, or acted upon by the artist – positing the screen as a type of barrier, a flimsyfaçade of fixity to be lacerated, punctured, broken down. In Mind Craft, Quinlan’s investigation into heterogeneity opens up on the digital, and the screen reemerges having morphed into an evasive live surface that absorbs, reflects, simmers, recedes,and buckles under the restraint of its own materiality.

Here, chemical abstractions, in which the film images itself, appear alongside myriad new series. In a bold undertaking, Quinlan reckons with all categories of photography in terms of both technique and content: the landscape, the nude, the selfie, the scan, are presented in succession, subtly breaking down the borders between black and white and color, digital and analog. Quinlan comes to terms with the ubiquity of the photographic image with this broad, medium specific investigation, negating the idea of abstraction as an evacuation, and presenting the planar surface as a layer of reality to be contended with and deciphered.

In the work Where’s My Water, sheets of pool liner printed with digitally collaged quasi-classical motifs are cut and woven into a traditional Amish Bar quilt pattern. With the assistance of these printed digital composites, pools themselves function as screens, the liner as a kind of screen-saver, a virtual backdrop trafficking in economic and cultural fantasy.

In her series of large-format color c-prints, titled after video games, Quinlan slides mirrors across the glass plate of a flatbed scanner while the machine operates, reflecting the scan head’s light back into the lens. The resulting imageless, multicolored refractions are both articulated and captured by the scanner itself. Black and white silver gelatin photographs of forests and wildlife shot from life by the artist are interspersed with re-photographs of similar, readily available images downloaded from the internet; animals, trees, stars. Quinlan licensed documentary photographs from a news agency—a ruin in Palmyra targeted by ISIL in May, a restaurant window in Paris shattered during the violent November massacre—and re-photographed printouts of the images on a copy stand, a proto-scanner apparatus used by commercial photographers to position the camera lens perpendicular to its subject below. In a series of nudes, parts of Quinlan’s body are photographed pressed against the invisible but mediating glass pane of a shower door.

A grid of mirrors installed in the gallery’s 36 Orchard Street location hangs perpendicular to a black wall, upon which hangs a single photograph by the artist. Activated but blank, the mirrors suggest the unresponsive haptic surface of a device that has powered down. The mirror functions both as an allegorical category of the photograph, and a motif that Quinlan has utilized since she began to use photography.

Quinlan’s consideration of the screen here presents an ocular trap, a site for projection and absorption, granting the viewer illusory access to remote image-worlds (Palmyra, Atlantis, “nature”) lacquered in a slippery sense of authenticity.

Eileen Quinlan (b. 1972, Boston) earned her MFA from Columbia University in 2005. She had her first solo museum exhibition at the Institute of Contemporary Art, Boston in 2009. Her work is in the permanent collections of Metropolitan Museum of Art, Whitney Museum of American Art, Los Angeles County Museum of Art, Museum of Contemporary Art, Los Angeles, Hammer Museum, Ackland Art Museum, Whitworth Art Gallery in Manchester, the Brooklyn Museum and Zabludowicz Collection. Recent exhibitions include Image Support at the Bergen Kunsthall, and Transmission, Recreation, and Repetition at the Palais de Beaux-Arts Paris in 2015, What Is a Photograph? at the International Center for Photography (New York), New Photography 2013 at the Museum of Modern Art (New York),Outside the Lines: Rites of Spring at the Contemporary Art Museum Houston, a two-person exhibition with Matt Keegan at The Kitchen (New York) as well as a solo show and a two-person exhibition with Cheyney Thompson, at Campoli Presti (London). Previously, Quinlan participated in Picture Industry at Regen Projects, Los Angeles, organized by Walead Beshty, and group exhibitions at the Metropolitan Museum of Art, the Hammer Museum, White Columns, the White Cube Bermondsey, the Langen Foundation, Mai 36, Marian Goodman Gallery, Andrea Rosen Gallery, and Paula Cooper Gallery, among others. Quinlan’s work will be presented in a forthcoming two-person exhibition, Always starts with an encounter: Wols/Eileen Quinlan, produced by Radio Athènes, and curated by Helena Papadopoulos at the Museum of Cycladic Art in Athens.
www.miguelabreugallery.com