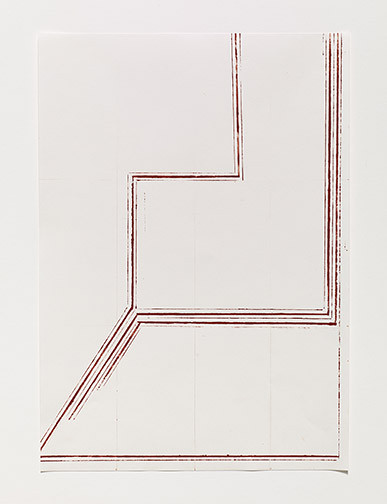 Miguel Abreu Gallery is pleased to announce Florian Pumhösl’s first solo exhibition at the gallery and in the United States, opening on Sunday, March 2, 2014. The show, which will inaugurate the gallery’s second space at 88 Eldridge Street, will be also on view at 36 Orchard Street.

The exhibition is comprised of six paintings depicting formally reduced letters from the Georgian Mkhedruli alphabet and twelve paintings based on a 19th-century rabbinical map (“Eretz Israel,” from Boundaries of the Land by Rabbi Joshua Feiwel ben Israel, Grodno, 1813). The austere motifs, carefully stamped on ceramic plaster panels in oil paint, were produced using separate rubber clichés for each line.

Pumhösl’s work can be characterized as an unfolding constellation of references encoded within a visual language that is purely formal. His paintings, films, and installations address the exhibition space as a medium. The mode of production of this most recent series, delicately situated between the proto-mechanical and the precise hand gesture, suggests early 20th-century avant-garde experiments in typography and graphic design. The geometricity of the rabbinical map—an abstracted representation of an imaginary land conjectured from historical writings—may recall the aesthetic idioms of Russian Futurism and Constructivism. Print publications are further evoked through Pumhösl’s manipulation and exhibition of the map. The diagram is divided into twelve equal fragments that are organized in a horizontal array, as if pages in a book. This method of display, which the artist considers an interruption of the architectural space, brings to the fore the contradiction between continuity and discontinuity that constitutes the book form and language in general.

Through his transfer of the map and interpretation of Georgian letterforms, Pumhösl underscores the arbitrary nature of the sign. In emptying these systems of their use value, he opens them up to other associations.
Transformed lines of obsolete and contemporary Georgian script become pictorial when freed from their linguistic weight and the linearity of written text. Similarly, a single line in a rabbinical map might simultaneously signify a territorial demarcation of land, a river, and a travel route. Cartographic text, too, functions arbitrarily, through its linkage of names to geographic locations. Pumhösl’s restaging of these sources exploits the threshold between the referent and the space of the image. The letterforms are stamped with a darker Pompeian red that brings to mind the tradition of fresco murals, while the map is rendered in a vivid orange-red favoured in modern design.

Through the displacement and abstraction of his dual sources, Pumhösl reflects on the hierarchy of the graphic, semantic, and phonetic denotations of text. Whereas the Georgian graphemes are highly phonemic representations of linguistic utterances, the reformulated letter motifs remind us that the form of the written word is not necessarily motivated by the spoken, and that an alphabet is fundamentally compositional. Here the shapes of the letters are deconstructed into nonhierarchical units that could constitute any character – horizontal, vertical, diagonal lines, and curves.

While Pumhösl’s panels might appear to be formalist abstractions, their signification is anchored by their historical sources. Thus he uses a vocabulary of reproduction to create works which underscore the fact that the fantasy of completely self-referential art was always already haunted by culturally specific aspirations.