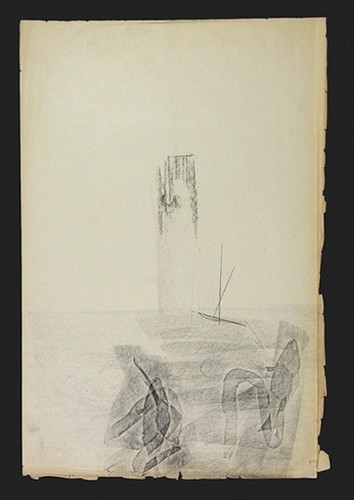 In many ways, frottage seems the most passé thing. Its focus on the action of the hand, its close alliance with pencil and paper and its interest in rubbing and touching all make it look a touch dated. Who does it anymore? Who really did it ever? That said, there are a number of qualities particular to frottage that make it of interest: its indexicality, its taint of memory, the way it translates a thing into an image (like a rudimentary photocopier). Perhaps frottage’s association with texture and tactility seems outmoded because, contrary to the smooth world of surfaces and signs that has become our natural habitat, it searches out cracks and fissures and imperfections. In this way it sheds light on overlooked interstices in our environment, even if it only offers them up again as artifacts and relics.
This rather discreet artistic technique possesses a social and somewhat prurient double; frottage is also “the act of rubbing against the body of another person, as in a crowd, to attain sexual gratification.”
The exhibition is organized around a specific, and simple, criterion – a way of making. From there, it branches out in various directions. The exhibition contains works by artists such as Max Ernst and Henri Michaux – some never shown before – who cherished frottage for its visionary capacities. It also includes new works by artists such as Melanie Gilligan, Richard Hawkins, John Kelsey and Scorched Earth. Where some of these artists turn to frottage as a “wrong” technique, others come to it through an interest in drawing and mark making. Still others are drawn to its relation to material things and their image.
This exhibition does not attempt to make a case for frottage against the images of the digital present. Rather, it seeks to set our moment into relief, using the outmoded as its guide.
www.miguelabreugallery.com