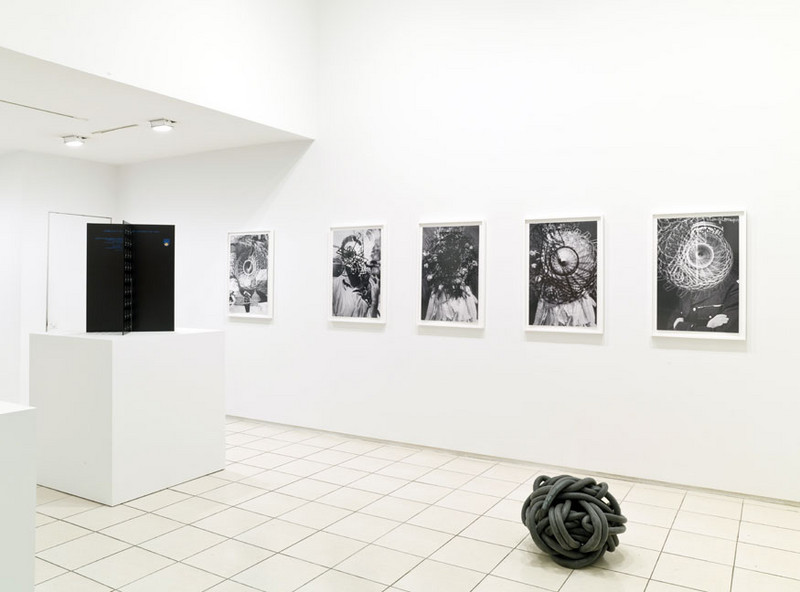 Miguel Abreu Gallery is pleased to announce the opening, on Saturday, October 22nd, of Human Metal, Gareth James’s first solo exhibition at the gallery. The show is comprised of three large-scale wall reliefs, four sculptures, and a series of black and white photographic objects all produced since the artist’s move to Vancouver a year ago.
The last installment in a cycle of three shows, Human Metal presents the scene of a pedagogical problem. Roland Barthes once declared that all works of art should have their own science of interpretation, and in a sense, James's interest in the pedagogical is an attempt to make this rhetorical assertion productive.
The first exhibition of the series, The Real is that which always returns to the same place, held in 2008 at Galerie Christian Nagel in Cologne, was organized around the artist’s theft of a bicycle. This act – addressed to the contemporary and historical function of the readymade – displaced the role of an artist's subjective choice in determining the materials selected for a sculptural practice by bringing to the fore the objective social condition of the materials' legal standing. The centrality of this piece placed a threat over the work of art by duplicating the legitimate form of ownership for the work, staging a potential for confrontation for the one who owns the bicycle as a bicycle, and the one who owns the bicycle as art.
The second exhibition, at Elizabeth Dee’s in 2009 (one for which a title could not be assigned) reoriented the threat away from the work of art, and towards the artist himself. The entire exhibition was produced in relation to a diagram that appears on a chalkboard behind French philosopher Louis Althusser in a famous photograph taken by Jacques Pavlovsky in 1978. James made this diagram, and his complete lack of knowledge about the diagram's meaning, the motor scheme of the show. The exhibition was thus built around a hole – one which opens up there where one ought to find the artist standing – and the threat could now be considered to hover over the artist himself failing to properly perform the role of holding (in the military sense of holding a strategic location) the position through which all meanings ought to pass.
Of course, this could only ever be a provisional and rhetorical abdication of the position of the artist: that position is a function, which cannot be renounced voluntarily by any individual artist. Mastery returns, if only by the back door. Thus the third exhibition was conceived as a necessary return to the pedagogical scene: the artist would research and study the diagram, and finally get to work on a concrete variation of the preceding exhibition, this time having shifted from one who does not know to one who has come to know. What James did not anticipate, was that it would appear that no one (still living) knows the meaning of this famous graph. Faced with the apparent fact that the meaning of this diagram has literally dropped out of the world, James was tasked with engaging in a supplemental form of the autodidact, and a series of decisions in which fields of study would need to be selected for the aesthetic, ethical and political tension that would match the anticipated address of the diagram.
In other words, the third show swerved in the void, becoming something akin to Barthes's science of interpretation, but for this lost object. Less oriented to hermeneutics and knowing than to granting the absent cause it's full generative capacity, Human Metal generates object-thoughts by detouring through the highly problematic and contested fields of anthropology, politics, colonialism, art and biography, aided by figures such as Claude Levi-Strauss, Paul Chaat Smith, Catherine Malabou, Sir John Soane, Rebecca and her Daughters and Madame Guillotine, as well as by conducting a symptomatic reading of those posthumously published texts that Althusser was writing in the same room, and at the same time, as the diagram was elaborated.
The large chalkboard wall reliefs dominating the space condense historical and cultural time: opening out from the silent chalkboard which acts as ground for both Althussers's body and for his inscriptions. The multipaneled, swinging chalkboards look back to Sir John Soane's architectural solution for storage, display and colonial acquisition. The same devices also recall the highly mediated and premodern origin of postmodernity in Baudelaire's living pillars, and forests of symbols. They are further swept up by the way in which that poet’s
fantasy structures Levi-Strauss’ work on split-representation in the hinged transformational masks of the Pacific Northwest, an effort that resonates in Malabou’s development of the notion of plasticity. Alongside these mobile grounds, photographic works reorganize the diagram as an instrument of graphic activity, resembling the rayogram's dreams of self-presence combined with the historicist hallucination of overcoming disappearance.
If, as Etienne Balibar has claimed, Althussers's entire life and work were connected in a real way to the confines of the Ecole Normale Superieure, James proceeds from his studio on the campus of the Unversity of British Columbia, itself on unseated Musqueam land.
www.miguelabreugallery.com