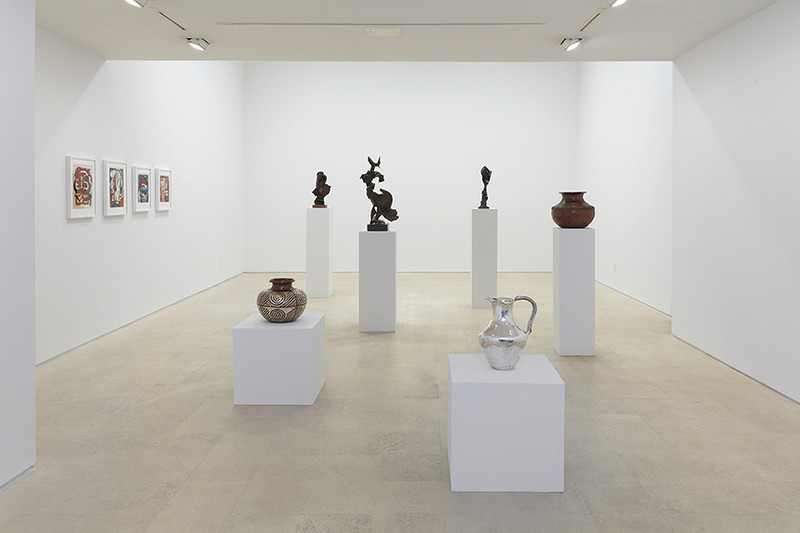 Miguel Abreu Gallery is pleased to announce the opening of Hammer & Forge: From Europe to Santa Clara del Cobre, an exhibition of work by the late sculptor James Metcalf. The show will be on view at our 36 Orchard Street location. The reception on Sunday, November 22nd will featurea conversation between Ana Pellicer (Metcalf’s fellow sculptor and collaborator) and Roy Skodnick (who worked with both artists in Mexico), coinciding with the launch of the new biography James Metcalf: True Son of Hephaestus.

James Metcalf (1925-2012) was an American artist, recognized during the late fifties and early sixties as one of the most promising sculptors of his generation. His work was exhibited in Paris, London,and New York in major galleries, acquired by important collectors and museums in the United States and Europe,and reviewed by major art critics (Sam Hunter, Hilton Kramer, John Russell, and John Ashbery.) In Paris, through his friendship with painter and patron William N. Copley, he associated with the Surrealists (Marcel Duchamp, Man Ray, Roberto Matta, and René Magritte). His studio at the Impasse Ronsin brought him into contact with Brancusi and younger artists, Claude and Francois-Xavier Lalanne, as well as the Nouveaux Realistes (Pierre Restany, Yves Klein, Jean Tinguely, and Niki de Saint Phalle). He remained solitary in his own work, recognized by his peers as a brilliant loner who was always ready to help them technically and artistically in their careers. His metal sculpture developed as much from his extensive knowledge of techniques of the ancient Mediterranean and Celtic worlds as from the abstract sculpture surrounding him at the time.

Raised in the craft tradition of stained glass in Yellow Springs, Ohio, in 1944 James Metcalf served as a frontline soldier for nine months in the Italian campaign of World War II where he was gravely wounded. After one year at the Pennsylvania Academy he worked with his parents at Antioch College, and was a political activist in the early civil rights and union movements. He left the United States in 1950 to master metal as a creative medium and studied at The Central School of Arts and Crafts in London until 1953.

Metcalf spent his summers investigating ancient Mediterranean metal sites in Spain, Italy, Greece and Crete. Metcalf’s base became Deya, Majorca, where he lived from 1953-1956. Friendship and collaboration with the English poet Robert Graves gave him the opportunity to explore the ancient European past in dialogue with a master of classical and near-eastern sources and a brilliant theorist as well. Graves incorporated examples of Metcalf’s metal expertise in his chapter on the smith god Hephaestus in his Dictionary of Greek Myths.

After fifteen years in Europe and a brief stay in New York City, in 1966 Metcalf decided to leave the commercial art world to live and work in Santa Clara del Cobre, a community of coppersmiths in the state of Michoacán, Mexico, where a pre-Columbian forging technique survived. It was there that Metcalf began his collaboration of forty-five years with the sculptor Ana Pellicer and an entire artisanal town of family forges.

This surviving pre-Columbian technique involved hammering kettles from solid ingot (what is technically called “blocking or sinking”), though not on iron anvils but on stone. Scrap copper was melted directly into holes in the ground without a crucible, lining the hole with oak ashes and smelting copper through a fire of oak and pine logs topped with charcoal, maintainingthe draft of the smelting fires with a bellows completely different from the European bellows. By introducing tools and methods from classical European silver smithing, Metcalf established the tradition known as El Borde Grueso or ‘The Thick Edge.’ This style of forging copper and silver produced a cultural and economic renaissance and has, today, made the town internationally known for the combined metal practices that theytaught.

Heirs to the vision of Mexico’s revolutionary generation of artists and intellectuals, Metcalf and Pellicerare unique in the cultural specificity of their work. From 1971 to 2002, they worked together with the Ministry of Public Education in the Popular Arts Program. During that time their small craft school trained three generations of metal smiths and grew into the jewel in the crown of Mexican technical education, one that Metcalf defined as “a reserve, a contemporary sanctuary, where the technical diversity of all trades of metallurgical production, ancient as well as modern, is protected.”

A Mexican woman and an expatriate American, trained in Europe, Ana Pellicer and James Metcalf fulfilled the dream of the founding Secretary of Education, José Vasconcelos, who sponsored the muralists and associated programs in popular arts. Their careers parallel those of Diego Rivera and Frida Kahlo, two artists that so admired native crafts. Yet the founding generation of Mexicanidad never actually lived and worked side by side with a community of artisans. Metcalf, Pellicer and the artisans of Santa Clara del Cobre fulfilled that vision, despite all obstacles along the way in the long saga of Mexican Education, Popular Arts and culture that created modern Mexico’s 20th century national identity.