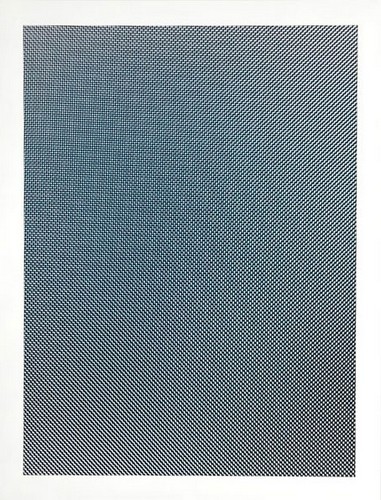 The eye should forget all else it has seen, and learn anew from the lesson before it.
It should abstract itself from memory, seeing only that which it looks upon.
— Stéphane Mallarmé on Manet (1876) [1]


Miguel Abreu Gallery is pleased to present Registration, an exhibition of new photographs by Liz Deschenes, her first solo show at the gallery.
If the photographic image can be said to have replaced the immediate experience of nature as the common ground of human perception, it can be argued that Liz Deschenes works to reverse that very evolution. Through her intense exploration of various photographic processes, she diverts both the eye and the mind back onto nature. Ironically perhaps, one of the keys to the fulfillment of this ongoing effort has been to insist on treating photography as primary, that is on turning it into a basic category of perception itself.
In traditional photography, the surface of photosensitive paper is imprinted by light with the image of a delimited, and forever inaccessible time and space—a captured event past. To be grasped, the common photograph requires the viewer to momentarily defer his or her present reality and enter a cross-section of frozen pictorial space.
Liz Deschenes relies on traditional photographic principals. In her recent Moiré series, she begins with a sheet of perforated paper placed against a well-lit window. She opens the shutter, closes it, and registers the silhouetted pattern of the paper on an 8 x 10 inch black and white negative. However, Deschenes does not print this singular photographic event. Rather, duplicating the negative, she superimposes two copies in the enlarger distorting the original image. Printed in color, the final image does not reveal the perforated paper, but, through the artist’s mis-registration of the two negatives, a unique moiréd formation.
At close range, Deschenes’ large Moiré prints may overwhelm the visual field – from further away they pulsate like electronic screens transmitting a live current. The optic nerve rapid-fires information to the brain as it negotiates the moiré’s ceaseless fluctuation of figure and ground. With the viewing of each Moiré, the brain instructs the eyes to open and close, registering with each blink, a new perceptual impression of the same physical image on the film of the retina. Circulating the room, the viewer’s attention oscillates, attempting to capture the image at hand while being deflected towards the out-of-frame. As if working against photography’s forced function to depict, this general movement activates the in between space and phenomenologically regenerates something akin to a direct experience of nature.
We exist in a world of imagistic clichés; wherein, Deleuze would claim, it is not that there is no reality for images to describe (à la Baudrillard), but that it is our contemporary dilemma to make an image that sufficiently describes our reality. The tendency is to allow the photographic image to stand in as a generalized representation of experience. However, with Deschenes, the experience is perpetually and variously occurring with every viewing. The gaze may not enter the distilled moment of the photograph, but is engaged by the photograph in the very moment of viewing.
Liz Deschenes recently participated in the group shows Bunch Alliance and Dissolve at the Contemporary Arts Center, Cincinatti, and For the People of Paris at Sutton Lane, Paris. In June, she will have a solo exhibition at Sutton Lane, London. Her work is included in the permanent collections of the Whitney Museum of American Art and the Metropolitan Museum of Art.