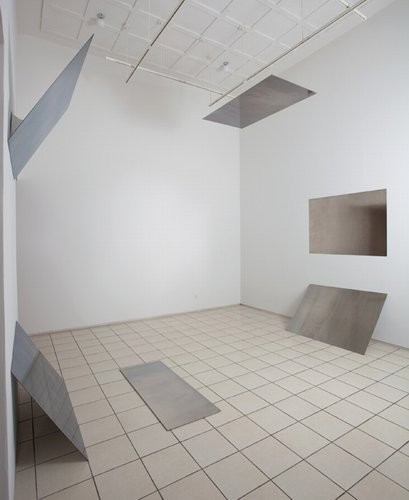 Opening on Sunday, May 3rd, Miguel Abreu Gallery is pleased to present Tilt/Swing, Liz Deschenes’ second solo exhibition at the gallery. By arranging six large, camera-less photograms into the loose configuration of a shallow portal, Deschenes materializes Herbert Bayer’s diagram of 360° field of vision from 1935. Bayer’s ring, formed by empty rectangular surfaces, construes an “inclusive picture of all [viewpoint] possibilities.”1 In the center of the ring, the eye’s liberated lens floats freely above the body, but remains tightly wreathed in a penumbra of vantages.
Deschenes fills Bayer’s empty panels with empty photographs – photograms evacuated of all representational content. By exposing photosensitive paper to the darkness of night and bringing the sheets back indoors before sunrise to fix them with silver toner, she produces a range of slightly reflective sheens. The photogram circumvents the responsibility of figurative depiction in favor of temporal record. The photographic moment has passed, but the possibility for another image begins, or continues. The passersby may scan the slippery surface, detecting their own cloudy features. Although out-of-focus and incomplete, we are pictured. The resulting image, more absorptive than reflective, is fleeting. As the exhibition proceeds, the atmospheric circumstances will tend to slightly oxidize the photograms’ surfaces, manifesting a third, time based material operation.
Transforming Bayer’s diagram into architectural plan, Deschenes sublimates the camera’s tilt/swing by covering the lens and producing camera-less photographic objects. This latent tilt/swing then re-emerges in the dynamic angling of the panels that refract the viewer’s wanderings. The various sizes of these reflective photograms adhere to the human scale of Bayer’s 5-foot tall line of sight. The spatial approximation ends there, however, as Deschenes expands the interstices of Bayer’s diagram to incorporate rather than veil her architectural surroundings. New perspectives of the gallery emerge between and around the suspended panels. A reflection is never fully separate from the space of the room or the duration of the viewer’s vision. Without human intervention the ensemble calcifies into a sculpture that endlessly looks back onto itself. It is the tilt and swing of the viewer’s body – not the absent camera – that allows the photographic panels to receive an image. While this recent emanation of Deschenes’ Photographs series actively engages architecture, the most conspicuous reference for her ongoing body of work would be John Szarkowski’s 1978 exhibition, Mirrors and Windows: American Photography since 1960. The tie between her literalization of his title expedites a satisfactorily symbolic interpretation, but it occludes the economy with which Deschenes addresses Szarkowski as a means for citing Bayer.
In the exhibition catalogue for Mirrors and Windows Szarkowski states: “There is a fundamental dichotomy in contemporary photography between those who think of photography as a means of self-expression and those who think of it as a method of exploration.”2 The first description applies to the mirror while the second refers to the window; introspection and extroversion comprise the two furthest points on this scopic spectrum. When hung individually on a wall, Deschenes’ Photographs function as foggy mirrors, and in a wry rhetorical twist upon Szarkowski’s definition it is the viewer’s introspection, rather than the photographer’s, that the dulled surfaces refuse to fully deliver.
Meanwhile, the interstitial non-photographic space, framed by ‘mirrors,’ forms a ‘window’ into the surrounding site. The successive vacillation between the ‘mirrors’ and ‘windows’ invites the viewers to associate their reflections with a specific context. This opening into the surrounding space is like a stone skipping across the narcissistic reflecting pool of the ‘mirror.’ In all fairness to Szarkowski, these photographic objects never intended to reference the 1970s ‘me’ generation of self-expression that followed the exploratory mass movements of the 1960s. Nor is this work interested in faithfully replicating Bayer’s Bauhaus aims for clarity, efficiency, and didacticism. As a pendant to this camera-less investigation, Deschenes presents us with an unexpected counterpart. Comparatively small in scale, two representational black and white photographs render a non-representational photogram. Captured obliquely from the left side, we see a slice of projected light spill over the edge of a framed sheet of white. Inside the frame hangs a piece of emulsified paper that has been developed in the darkroom. Without ever being touched by light, this photogram elides all possibility for exposure and approaches only the barest definition of a photograph.
As if only surfacing for air, Deschenes’ camera makes an uncanny return to render two essential components of the analog image: paper and light. By re-establishing the documentary mode to bring forth the proximity of these dis-entangled elements, she self-consciously documents the option to dispense with depiction. The reintroduction of the camera is, in effect, a fleeting reappearance of the photographer – her lens, her eye and her point of view. Deschenes delves into the dominant conditions of seeing by returning to a specific historical precedent. Like Bayer, Moholy-Nagy and El Lissitzky, she instrumentalizes photography as a tool for liberating vision. But in sharp contrast to Bauhaus photography and our current landscape of the ubiquitous screen, her gesture does not compress space, architecture, and time. Instead of dictating views, she refuses enclosure and empties the screen.
The only information viewers might walk away with is a reintroduction to their own bodies in time and space. We may say that this work de-compresses time and space in order to invent it anew.
In a collaborative project with Gaylen Gerber opening on May 16th, Liz Deschenes will be included in The Art Institute of Chicago’s Modern Wing Inaugural Installation of Contemporary Photography, curated by Matthew Witkovski. In early June, she will participate in Art|40|Basel – Premiere in an exhibition alongside R. H. Quaytman with Miguel Abreu Gallery.
www.miguelabreugallery.com