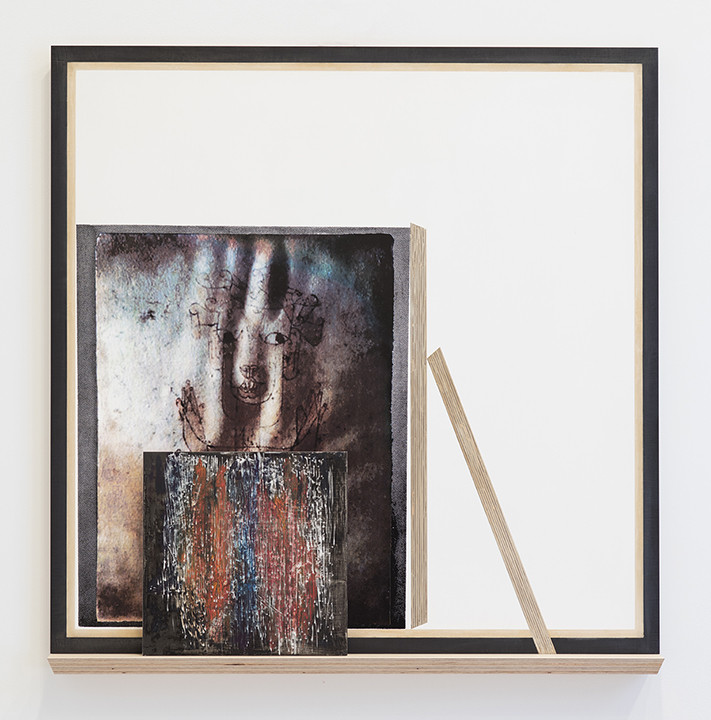 Miguel Abreu Gallery is pleased to announce the opening, on Wednesday, October 7th, of חקק ,Chapter 29, R. H. Quaytman’s second solo exhibition at the gallery. The show will be on view at our 36 Orchard Street location.

This exhibition comprises a small selection of works from חקק ,Chapter 29, 1 originally presented this past spring at the Tel Aviv Museum of Art. In addition,a group of paintings will be shown that are based on a discovery R. H. Quaytman made a few weeks following the Tel Aviv opening. This discovery concerns Paul Klee’s Angelus Novus (1920), which the artist had the rare opportunity to view in person two years ago in the offices of the Israel Museum, Jerusalem. Quaytman saw something that previously had gone unnoticed—that Klee had purposefully glued the Angelus Novus monoprint directly onto an old engraving. The engraving, clearly visible around all four sides, hinted at a portrait of a single figure in a black robe made by someone with the initials LC in the 1520’s. This struck Quaytman as highly relevant, not only to what Klee intended with this gesture of defacement, but also to Walter Benjamin’s well known essay, “On the Concept of History,” which situates the temporal past in front, not behind, the Angel.

In cooperation with the paper conservation department at the Israel Museum, Quaytman embarked on a two year pursuit to uncover the identity of this occluded subject. Scientific imaging techniques, such asx-ray and thermography, produced some of the images incorporated in the first iteration of Chapter 29. However, as it turned out, these advanced techniques were unable to answer the primary question: Who is hidden behind the angel? Upon returning to the studio, Quaytman continued to search websites and databases from libraries and museum collections that made images of their print collectionsavailable for consultation. After untold hours, and a little luck, one night she found the solution, like a needle in a hay stack... Quaytman felt the chapter would not be complete without making a few new paintings that reveal the irrevocable answer, an answer that does not satisfy so much as add complexity and mystery to this icon of ideology.

A catalogue on חקק ,Chapter 29, with contributions by Mark Godfrey, Annie Bourneuf, Suzanne Landau and R. H. Quaytman, will be available in November 2015.