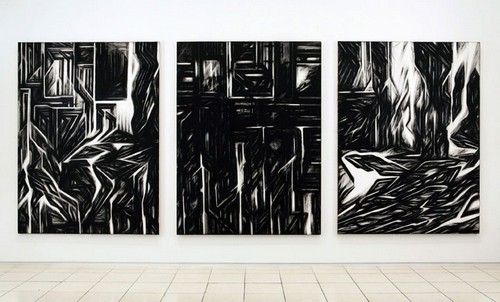 Miguel Abreu Gallery is pleased to present ‘Stele,’ an exhibition of new paintings and drawings by Raha Raissnia, her first solo show at the gallery. A shaft of light on darkness remains a force to be reckoned with in Raissnia’s exiled, gestural paintings. As if scratching the arid earth from too close a range, the architectonic balance of her black and white shapes seems to emerge from an extended battle. As if charred by overexposure to the heat of the sun, her tumultuous compositions appear to struggle against the passing of what might have been long ago an ardent color arrangement. There is no need to attempt calling to mind uncertain references to urban life, nature, or to the cosmos, for those tend to be refuted before they can prove themselves. Here the mind is made to wonder and the body shows.
Raissnia emigrated from Iran to the United States in 1983, and it is perhaps because she comes from ‘elsewhere’ – that is from a certain distance – that she so freely encounters, as if by chance, some of the towering figures of modernist painting. Early Jackson Pollock springs to mind, or the RobertoMatta of the same period. By analogy, the effect of her practice is reminiscent of the moment when the miraculous films of her countryman Abbas Kiarostami first stunnedWestern audiences, at the very time modern cinema was declared a thing of the past.
Raissnia paints, but her paintings and drawings are as much acts of inscription. For the master of Islamic calligraphy, to recognize the shape of a single word often suffices to learn and recite by heart the calligraphic text or poem at hand. This kind of foreign skill of the mind might have something to do with the referred to ‘elsewhere’ that, somewhat paradoxically, enables the artist to create the assured and affirmative images she makes here and now.
Raissnia received her BFA from the School of the Art Institute of Chicago in 1992 and herMFA from Pratt Institute in 2002. In between receiving her degrees, her interest in avant-garde filmmaking led her to take on an internship at Anthology Film Archives (1995-1999) where she also occasionally exhibited. Recent solo shows were held at Galerie Xippas, Paris and the IsfahanMuseum of Contemporary Art, Isfahan, Iran.
On Tuesday,November 21st, at 8PM, Raissnia will project a montage of her manipulated slides at the gallery in collaboration with musician Charles Curtis.
www.miguelabreugallery.com