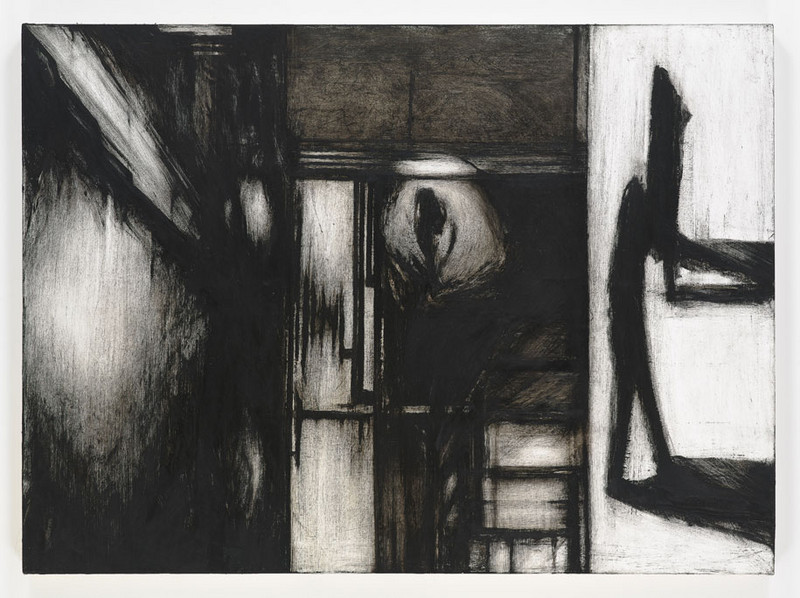 Miguel Abreu Gallery is pleased to announce the opening of Raha Raissnia’s Early Sping on Sunday, May 8th , the artisit’s third solo exhibition at the gallery.
The show features an 11-minute, looped 16mm film, along with a sequence of four small-scale paintings that, in a sense, emanate from the film. The dense and layered cinematic object itself takes at its starting point footage that Raissnia shot in 2005 in the slums of the Molavi neighborhood of Tehran. As is customary with her work, the original film has been layered and superimposed with other film and video materials to produce an immersive, high-contrast visual experience that allows only traces of the initial documentary footage to appear here and there.
By contrast to Raissnia’s earlier paintings, the scratched surfaces of the black and white works in this exhibition are marked by a loosening of their architectonic structure. Imagery ambiguously reminiscent of moments in the film seem to re-emerge in the paintings in a somewhat ominous interplay of forms, things, light and darkness.
Raha Raissnia received her BFA from the School of the Art Institute of Chicago in 1992 and an MFA from Pratt Institute in 2002. In between completing her degrees, her interest in avant-garde filmmaking led her to take on an internship at Anthology Film Archives (1995-1999), where she also occasionally exhibited. Solo shows of her work were held at New York’s Thomas Erben Gallery, Galerie Xippas, Paris, and the Isfahan Museum of Contemporary Art in Iran. In 2010, she had a one-person exhibition at Galeria Marta Cervera, Madrid, and was the recipient of a Foundation for Contemporary Arts Grants to Artists Award. Last February, The Kitchen, New York, presented Cosmography, Raissnia’s film/music collaboration with composer Briggan Krauss.
www.miguelabreugallery.com