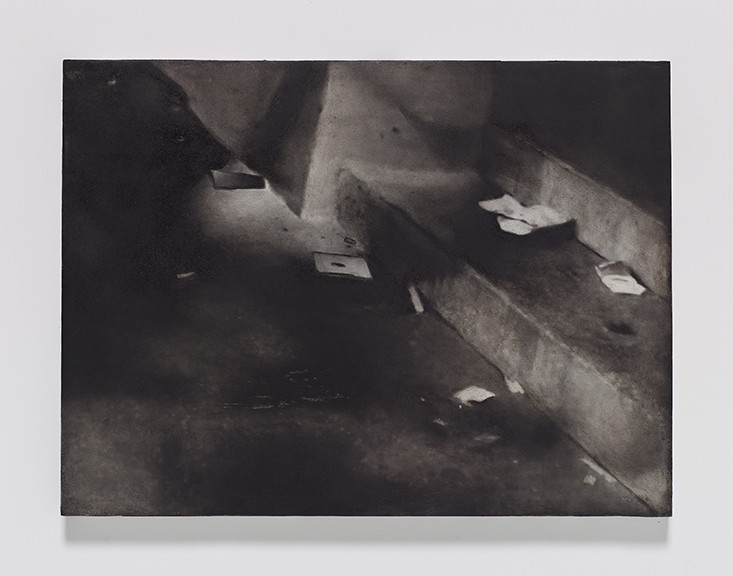 Miguel Abreu Gallery is pleased to announce the opening, on Thursday, November 5th, of Raha Raissnia’s Aberration, the artist’s fifth solo exhibition at the gallery.

On view at 88 Eldridge Street, this show brings together Raissnia’s recent body of work, which takes as its point of departurefootage she shot in 2013 in New York’s East Harlem. Longing, a 16-mm film, which is included in the All the World’s Futures exhibition at the current Venice Biennale, is presented along with a constellation of drawings and a series of new paintings. This configuration of works epitomizes the artist’s expanded cinema practice: the rhetoric of film reverberates throughout her workin other media, while fragments of her paintings, drawingsand hand-painted slides reappear in the films.

The raw footage for Longing was initially recorded on a mobile phone camera. “The hidden camera and my inability to frame what I was capturing caused sweeping and erratic movements, which resulted in abstractions throughout the film,” writes Raissnia. “These effects are not there in order to create any aesthetic quality or else evade figuration, but are just part of the motion of real life, captured on film through my bodily movements.” As is particular to her working practice, she then re-filmed and manipulated the original footage in her studio, incorporating found materialsand hand-painted slides through a denselylayered process of superimposition of imagesand projection onto paintings and screens.

Initiated in the pure flat surface of the touch screen and digital footage beforeacquiringthe sensuality of celluloid film and the immediacy of materials, Raissnia’s accumulative layers of mediation reinstate depth and texture in the work of art. Similarlyin her two-dimensional work, the palimpsest-like technique of using Sumi ink, compressed charcoal, oil paint and image transfers, followed byscraping and erasureand the reapplication of such materials, evokes tactile presenceand operational process. The sound for the film composed by Panagiotis Mavridis likewise implicates the materiality and structural properties of the medium: for some music elements he used rolls of celluloid film mounted on gear motors.

Resulting from Raissnia’s quasi-archeological approach are aleatory forms and compositions, which oscillate between abstraction and figuration. “Within the dense, complex, tactile experience of her images,”as Milton Cruz says, “Raissniais often able to engage in bold variations of forms. For example, suddenly, it is a nearly white canvas with a tenuous armature of lines, and new spatial possibilities are revealed. Or a block of color suddenly dominates the monochromatic field with an almost humorous poignancy.

“And then the mark becomes a figure. For manyyears, Raissnia’s paintings were mostly experiential modulations of a kind of organic living space of the mind. Certainly abstract but always with some “human” element to them: the suggestion of a window, a doorway, city landscapes, bodily textures, vague figures seen through slits-of-eyes... but gradually, ever more boldly, the figure has asserted its way into her paintings.

“Playfully, tenuously at first. Something peeks out from a small empty nodule beneath thick folds of ink. Something resembling a head – though not quite – in an impossible position in the fanciful architecture. A bare foot – that much clearer – from underneath a robe. The eyeless upturned face of a child, half-blotted out, next to a glass door. Beyond a doorway, on a raised platform almost like a theatrical stage, a figure on a cot: most probably human, curled up, sleeping...”

Raha Raissnia(b. 1968, Tehran, Iran)received her BFA from the School of the Art Institute of Chicago in 1992,and her MFA from Pratt Institute in2002. In the interim, her interest in avant-garde filmmaking led her to work at Anthology Film Archives (1995-1999), where she has alsoexhibited. In 2015, her work was included in All the World's Futures, curated by Okwui Enwezor, at the 56th Venice Biennale. Previously, her work has been featured ingroupexhibitions at White Columnsand The Kitchen (New York), Access Gallery (Vancouver), the Museum of Contemporary Art St. Louis, and Thomas Dane (London), among others. Solo shows were held at Galeria Marta Cervera (Madrid), Galerie Xippas (Paris), Thomas Erben (New York),and the Isfahan Museum of Contemporary Art (Ishfahan, Iran). Raissnia’s projection-performances, in collaboration with Aki Onda, Charles Curtis, or Panagiotis Mavridis,have been held at Arnolfini – Center for Contemporary Art (Bristol, UK), Issue Project Room, Tonic, Diapason, Miguel Abreu Gallery, and Emily Harvey Foundation (New York), among others. Raissnia’s first solo exhibitionin Tehran will be held at Ab/Anbar Gallery in December of this year,and will be accompanied by a monograph.
www.miguelabreugallery.com