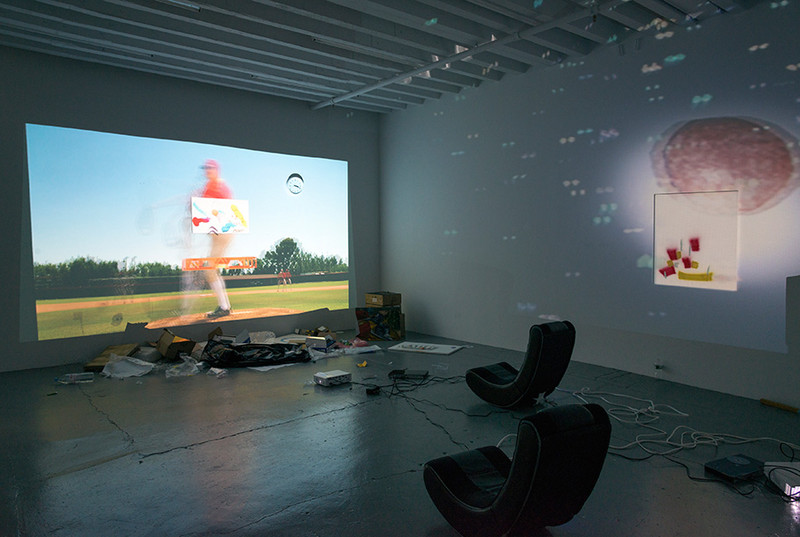 Miguel Abreu Gallery is pleased to announce the opening on July 2nd , 2014 ofSequence 5,a group exhibition that unfolds and constitutes itself over time with the regular installation and reinstallation of works spanning the two gallery locations. Expanding upon the gallery’s previous Sequence exhibitions, which staged progressions of individual works like shots in a film, the show’s display will be reconfigured with added objects each week, resulting in a fluctuating accumulation. The works included in this iteration explore the possibility of a new poetics of sculpture wherein radical craftsmanship activates the potentiality of dormant surfaces.

Presented by itself the first week at 88 Eldridge Street, a multi-media installation by Trisha Baga will anchor the successive additions, while a duo of bronze and glass ‘knot’ sculptures by Jean-Luc Moulène initiates the sequence at 36 Orchard Street. These sculptures will be reinstalled alongside Baga’s work the following week, while Aaron Flint Jamison’s small-scale wall relief is introduced in their place. The third week, this work too will migrate to Eldridge Street, while a copper-sheet-based piece by Sam Lewitt appears at the Orchard Street gallery. The exhibition will develop following this basic movement until the final week, when the grouping is fully constituted on Eldridge Street and Yuri Ancarani’s film Il Capo concludes the proceedings on Orchard Street.

Addressed as much to the senses as to the intellect, the objects at hand tend to trade in a currency that operates at the fringes of the visible, their oblique quality resisting instrumentalization, thereby disrupting our conventional access to modes of knowledge. The participating artists put the limits of materiality into play: their work gestures toward and opens onto adjacent spaces where textual, narrative, and poetic elements are held in the wings. Rifts and tensions are staged through opacity and variability while associative and equivocal relationships between the works emerge and shift as the exhibition takes shape.
www.miguelabreugallery.com