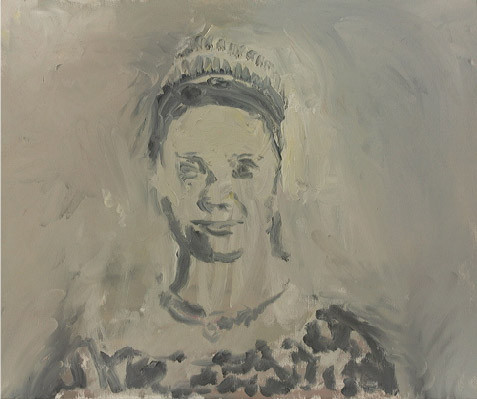 Milliken is proud to present, Tools and Grammar by Felix Gmelin. This exhibition, an extension of the installation displayed in the 52 Venice Biennale Think with the Senses Feel with the Mind curated by Robert Storr, revolves around how humans use the sensory organs to form our understanding of the world around us. The starting point of the series is a silent movie, Bei den Blinden, that is a promotional film of a blind school in 1926 Stuttgart Germany. The film rediscovered in the Bundesarchiv in Berlin demonstrates the school’s philosophy in a series of scenes where the blind children explore the graves of a church cemetery and then return to school to remake the gravesites in clay models. Tools and Grammar is a multimedia installation that includes, paintings and photographs on canvas, dia slides, two films, and three voice over sound pieces in four languages.
Gmelin’s work can be seen worldwide including at the Venice Biennale 2007, KW Institute for Contemporary Art, Berlin, Apexart, New York and UNAM, México City, Mexico. He has had earlier solo exhibitions at Portikus Gallery, Frankfurt am Main 2005; Malmö Konstmuseum 2004; Milliken, Stockholm 2004 and maccarone inc. 2003, New York. Group exhibitions include Of Mice and Men, 4th berlin biennial for contemporary art, 2006; Modernautställningen, 2006 Moderna Museet, Stockholm; Delays and Revolutions, Venice Biennale 2003; Iconoclash, Beyond the Image Wars in Science, Religion and Art, ZKM, Karlsruhe 2002.
In combination with this exhibition, the gallery published an essay by the Berlin based critic Jennifer Allen, a continuation of the essay series that pairs writers and artists. Ronald Jones writes on Olav Westphalen and Adam Carr about Tris Vonna-Michell.
Thank you to ELECTROSOUND for the innovative sound solution.
www.millikengallery.com