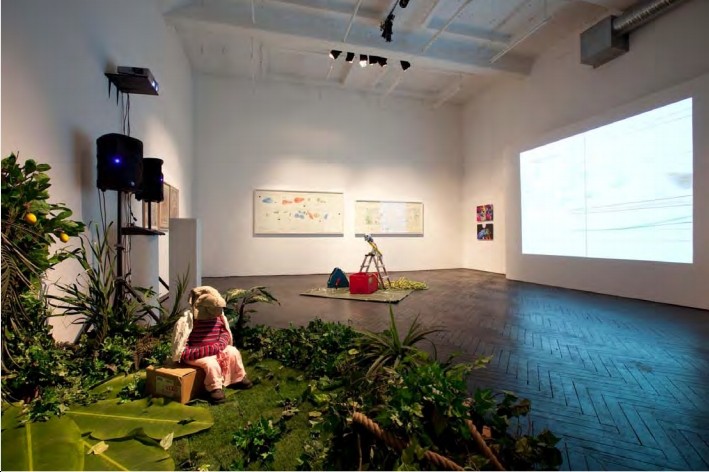 The upcoming exhibition at Milliken Gallery looks at the influence of music on contemporary art, focusing on the vital Swedish scene in which music and art frequently blend. The exhibition presents works by some of the most prominent Swedish artists in which music plays a central role, featuring a wide range of musical styles and artistic practices, making up an eclectic and unusual exhibition accompanied by a miniature music
festival with regular events by some of the participating artists.
The works of art in the exhibition relate, in one way or another, to the production, the experience or the making of music. The widely recognized work by Nathalie Djurberg, for instance, is frequently accompanied by music from composer Hans Berg. Hans Berg’s music falls within the alternative, electronic, side of musical practice and the exhibition and festival begins with a unique opportunity to see the composer at work live to several of Djurberg’s videos. Further in the festival program, Christine Ödlund performs her noted sound pieces Stress Call of the Stinging Nettle and Plant Drummer together with the band Gul Amiral. The two works originate from research made by the artist at the Royal Institute of Technology on the communication between plants. Ödlund, a trained composer interpreted the dialogue and made drawings reminiscent of sheet music as well as video and sound also included in the exhibition. Further performances in the month of May are by Matti Kallioinen who will present a recently invented musical instrument in an attempt to take control of digital music, Peter Geschwind plays a sound piece predicated on washing machines and Andreas Nilsson & Hans Appelqvist have devised a narrative performance existing in between being a lecture and a musical. Milliken Gallery is also proud, as typical for music festivals, to present special musical guests at several of the evenings.
Within the exhibition Fredrik Söderberg displays the original works for his numerous LP covers. Johanna Billing delicately weaves together film, music, rhythm and movement in the video Magical World, in which a children’s choir rehearses the 1968 Rotary Connection song Magical World written by Sidney Barnes. Peter Geschwind displays his film Sound Cut, a one-minute video loop featuring sounds household items make, edited to the beat of a Dead Kennedys song, analyzing a angry, inflammatory punk rhythm and Elisabeth Frieberg exhibits large canvases in which the shared vocabulary between painting and music becomes evident.
www.millikengallery.com