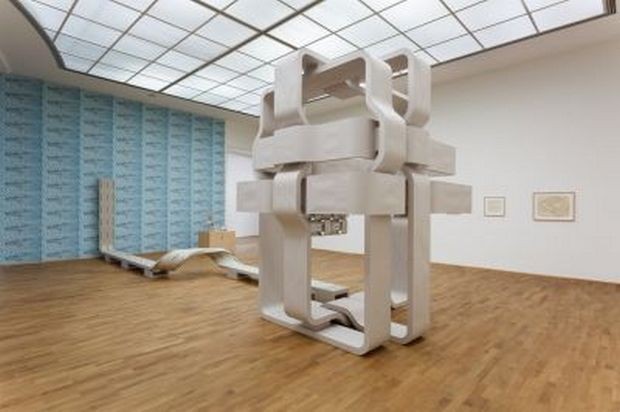 In honour of the museum’s twenty-fifth anniversary, a new presentation of the collection awaits the visitors with a focus on the acquisitions of the past few years.

In June 1991, the MMK Museum für Moderne Kunst opened in the museum building designed by Hans Hollein – affectionately referred to by the Frankfurters as the “piece of cake”, this work of post-modern architecture still possesses model character today. Twenty-five years later, the MMK is one of the most prominent museums of contemporary art worldwide. Its collection encompasses more than 5,000 artworks dating from the 1960s to the very present.

As far back as the early 1980s, the city of Frankfurt attracted wide notice when it purchased works from the former Karl Ströher collection and thus laid the foundation for the museum’s collection. Consisting largely of examples of American Pop Art and Minimalism of the 1960s, these original holdings include groups of superb works by such artists as Andy Warhol, Claes Oldenburg and Roy Lichtenstein, but also by German artists of the same period, for example Joseph Beuys, Gerhard Richter, Blinky Palermo and Franz Erhard Walther. In the years that followed, the collection was consistently expanded through the addition of works by contemporary artists of many nationalities. Especially worthy of emphasis here is the enhancement of the holdings in more recent years with examples by non-Western artists of India, Asia and Africa. The internationalization of the collection has gone hand in hand with a programme of special exhibitions devoted increasingly to the world outside Europe, for instance the show “Kader Attia: Sacrifice and Harmony” on view until 14 August.

The show will consist almost exclusively of workgroups made especially for the museum, in some cases in close collaboration with the artists for certain spaces in the building’s interior and in dialogue with the architecture. “It is above all the tremendous support of the artists that has enabled us to amass a collection of such superb quality”, emphasizes Dr Susanne Gaensheimer, the director of the MMK Museum für Moderne Kunst. One of the distinguishing features of the MMK holdings is that they encompass not only classical artistic media such as painting, printmaking and sculpture, but also – and to an equal degree – such media as installation, photography, film, video and performance. Starting in June, for example, newly acquired installations by Wolfgang Tillmans, Isa Genzken and Carsten Nicolai as well as photographic works by Dayanita Singh, Tobias Zielony, Gerald Domenig and Santu Mofokeng will be on view. In the examples by the choreographer William Forsythe and the fashion designer Kostas Murkudis, among others, the focus will be on the boundaries between the visual and other branches of the arts. What is more, the museum is taking its anniversary as an occasion to present ceramic works by Shane Munro, photographs and films by Jack Smith, workgroups by Adrian Williams and Michael Pfrommer, a room installation by Carsten Fock, a large-scale multipartite drawing by Zinny/Maidagan and one of the earliest drawings by Sturtevant, all for the very first time. Another MMK premiere will be the workgroup by the artist Stephan Huber. Thomas Bayrle will be represented with an extensive workgroup on one of his core themes, the Autobahn. Spanning a period of more than thirty years, this group will form a link between artists of the past and present. One of the linchpins of the new presentation will be On Kawara’s Date Paintings, a workgroup that was expanded in 2014 through the addition of nine further paintings from the series and the artist’s One Hundred Years Calendar.

Even after a quarter of a century, the MMK’s unique post-modern architecture still offers incomparable and surprising insights and outlooks into and on the respective presentations. In 2016, a guided tour of the MMK is thus as indispensable an experience as always.
www.mmk.art