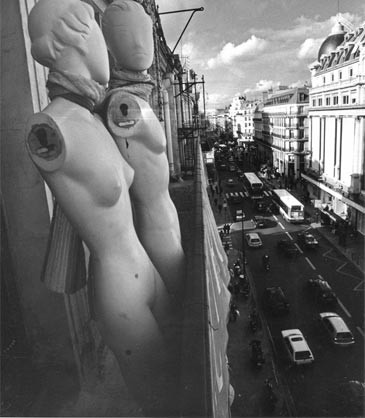 November 11 2009, 7 p.m., we will be launching the following exhibition at the MMK Zollamt:

For 40 years, Barbara Klemm worked as a staff photographer for the “Frankfurter Allgemeine Zeitung” newspaper, and her pictures strongly influenced the face of that publication. A chronicler of contemporary German history, she has nevertheless traversed all the continents. She can tell stories with a single picture – with an almost unprecedented intensity and depth. Barbara Catoir has written that “Barbara Klemm is all eyes, eyes that are constantly on the lookout. She doesn’t search, she finds, she discovers that which moves her, seizes and fascinates her, that which appeals to her sense of humor and in which she can see a sign of the times. Ever since her early days as a photographer, the street has offered her the broadest and most atmospheric repertoire of motifs in terms of people, landscape, climatic zones and the light of various seasons and times of day and night.”
In addition to Barbara Catoir, Hans Magnus Enzensberger has also contributed a text to Barbara Klemm’s photo book, to be published by “Nimbus. Kunst und Bücher” to coincide with the Frankfurt Book Fair. In it, he describes the street as a “permanent world exhibition, with no schedule, no direction and no entrance tickets. The cast is continually changing; an enormous ensemble entertains us, makes us angry, takes us on an emotional roller coaster ride... The street is a hopeless case. For the street belongs to us all.” Here, the street as the greatest venue of the quotidien denotes public space in all its imaginable aspects. Be it between the skyscrapers of New York or on a dirt track in Inner Mongolia, be it at a bus station in Johannesburg or between huts in the Andes – Barbara Klemm finds the human condition everywhere. The street is the place where people work, eat and celebrate. At the same time it appears as a stage on which figures encounter each other as in a theater. Incidents that are in themselves humorous are juxtaposed to pictures of elementary distress. Be that as it may, Klemm’s work always focuses on people and how they live.
And for all the contrasts she encounters, Barbara Klemm avoids playing to the emotions. This is her greatest gift, the ability to highlight the dignity of even the most inconspicuous and miserable among us. And we ask ourselves how is it that she manages to be present with her camera in every corner of the world without creating any visible commotion and at the same time connect deeply with her subjects on the most profound level.
The exhibition will present around 60 photographs featured in the illustrated book, complemented by various works from the collection of the MMK Museum für Moderne Kunst in Frankfurt/Main.
www.mmk.art