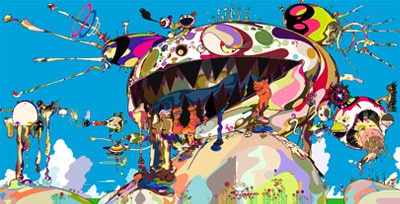 MMK Museum für Moderne Kunst in Frankfurt/Main presents the most comprehensive retrospective to date of the works of Takashi Murakami. In May 2008, Time Magazine cited Murakami as one of the 100 most influential people in the world. As with the case of the major Sturtevant exhibition in 2004, the entire museum will be devoted to showcasing Murakami’s oeuvre. For the duration of the exhibition, only works by this artist will be on view, with the MMK transforming itself, as the title suggests, into a © MURAKAMI Museum.

© MURAKAMI was organized by The Museum of Contemporary Art, Los Angeles (MOCA), whose chief curator Paul Schimmel curated and supervised the exhibition. After Los Angeles, the exhibition traveled to the Brooklyn Museum, New York. MMK Museum für Moderne Kunst Frankfurt/Main is the first platform for the © MURAKAMI exhibition in Europe. Here, the show has been organized by Udo Kittelmann and Mario Kramer in close collaboration with the artist. The last stop on the tour will be the Guggenheim Museum Bilbao.

For the MMK show, more than 130 works by the artist in various media – painting, sculpture, installation, and video – are divided up into several chapters and then spread out across all three levels of the MMK. The exhibition was site-specifically designed by Takashi Murakami with the specifics of the MMK’s architecture in Frankfurt in mind, and is complemented by works specially produced for this situation. The exhibition is not arranged in chronological order but is tuned to the rhythm and choreography of the given setting and the artistic requirements of the works involved. Nonetheless, the presentation does enable visitors to follow Murakami’s artistic development.

Born in Japan in 1962, Murakami typifies a generation of artists whose pictorial idiom combines motifs from pop culture with the stylistic characteristics of traditional Japanese art, such as flatness, patterns and ornamentation.

Takashi Murakami is one of the most influential artists to come out of Japan in recent decades. He has produced an extensive and highly varied oeuvre that appeals to a wide audience – from art collectors to video game-obsessed youths. In a manner reminiscent of Andy Warhol, Keith Haring, and Jeff Koons, his works not only reference pop culture, but go one step further: they merge with his life as a whole to forge a new reciprocal link between high and mass culture. Because he includes pictorial imagery from the worlds of media and consumerism – imagery taken from his everyday life (both in the United States and in Japan) – Murakami’s characters evolve an iconography that is both fantastic and spiritual in equal measure, an iconography that he brings to life in paintings, films, installations, and sculpture. As a next step, he feeds the figures he has created back into the product cycle by bringing them to market in extremely high quantities as merchandising products – for example, as prints, but also as key rings, badges, and T-shirts.

An essential part of the exhibition is © Murakami museum shop with numerous Kaikai Kiki products and a so-called merchandising room where hundreds of licensed products in the form of multiples and collectibles are on show on archive shelves.

Murakami covers an impressively wide range of activities handled by his international company Kaikai Kiki, Co., Ltd. In addition to his role as an artist, he acts as a curator, editor, event organizer, radio show presenter, author, and a newspaper columnist as well as a manager of young artists. He operates his studio along the lines of traditional Japanese artisans’ guilds with workshops organized according to a strictly hierarchical principle based on the division of labor.

The original, English-language catalogue © MURAKAMI will be available in the MMK museum shop with an accompanying booklet containing the German translations of the texts.
www.mmk.art