Croissant. Graduates of the Städelschule 2016 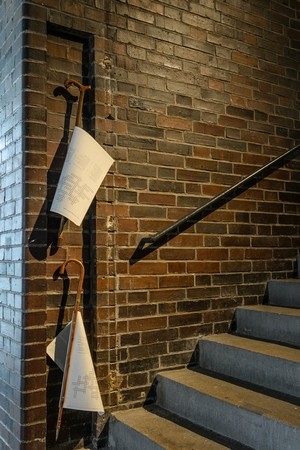 The exhibition of works by the graduates of the Staatliche Hochschule für Bildende Künste – Städelschule is taking place at the MMK 3 for the eighth time.

The MMK Museum für Moderne Kunst Frankfurt am Main is thus continuing its longstanding collaboration with the Städelschule that over the past years has led to numerous purchases for the MMK collection. The cooperation between the two institutions underscores their close mutual ties and provides the visitors insights into the great artistic potential lurking in Frankfurt. Works in a wide range of media such as painting, video, installation, performance and sculpture are on view in the rooms of the MMK 3. The variety of the artistic approaches is mirrored in the diversity of the themes addressed. Aislinn McNamara’s installation, for example, investigates the use of language and semantics; Ellen Yeon Kim’s sculpture and performance are concerned with the issue of imposed social roles and the potential failure to fulfil them; James Gregory Atkinson devotes himself to the aesthetic of subcultures and their misinterpretation.


The choice of the exhibition title came about by chance. “Croissant,” a word chosen randomly by one of the graduates during the preliminary discussions for the show, turned up again and again as the preparations continued and was finally adopted as the official title. Whereas in the past, the Städel graduates have usually chosen a specific theme as the focus of their group exhibition, here the connecting element is simply the joint completion of their studies. Nevertheless, the meaning behind the randomly chosen title is one that applies to the entire group: in French, “croissant” signifies, among other things, growth and progression – that is, a condition that characterizes the newly emerging generation of artists.
This year’s exhibition features works by twenty-six graduates from the classes of Peter Fischli, Douglas Gordon, Judith Hopf, Michael Krebber, Tobias Rehberger, Willem de Rooij, Amy Sillman and Josef Strau.

A loose set of cards designed by the graduates is being published in conjunction with the show. The publication’s open form represents the diversity of the artistic approaches. In addition to an introduction by Susanne Gaensheimer, it also contains a contribution by Philippe Pirotte.
www.mmk.art