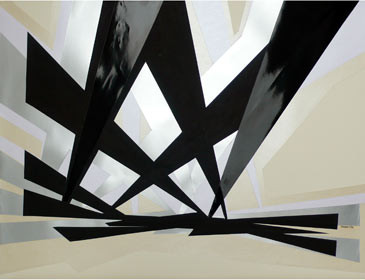 From Dec. 13, 2009 – Feb. 21, 2010, the MMK ZOLLAMT will be hosting a new show by Dolores Zinny and Juan Maidagan entitled “Compartment”. It is the couple’s first museum exhibition in Germany, for which they have specially devised a group of sculptures, collages and models. The group not only consistently advances one of the key thrusts of their work, but at the same time is strongly site-specific.

Zinny/Maidagan’s artistic oeuvre stands out for its critical reflection on architecture as a mirror of the political, psychological and poetic character of a location and a culture. In recent years they have thus created specific architectural installations in any number of places around the globe, each of which drew the viewers into a special and psycho-emotional world. In the MMK ZOLLAMT exhibition, for the first time Zinny/Maidagan will be showcasing works that find an abstract form for clearly referencing the site and possess a strong streak of formal autonomy.

In recent years, Zinny/Maidagan have found countless different shapes and materials with which to realize symbolic/spatial themes, such as the fold, or used the theme as the footprint for an expansive architecture. Their works with fabric curtains, whose properties are transposed through the interplay of folds, seams and covers onto the architecture and space/body in their work. In the context of these projects they have devised a large number of collages and models that not only serve as the conceptual framework for their sculptures and installations, but also to convey their vision of space.

Zinny/Maidagan’s works take their cue from the Modernist formal idiom and are enriched by cross-references of a scientific, artistic or literary nature. While the duo’s installations have to date been influenced by the dynamic thrust of globalization and uprooting, the new artworks created for the MMK ZOLLAMT focus on the grand utopian and Modernist notions of the 1920s. They take as their starting point 1927, the year when the MMK ZOLLAMT was built.

The sculptures, collages and paintings also reference the art and politics of that epoch. Through references to “New Frankfurt” as the epitome of modern urban planning and pioneering welfare housing, and to film classics such as “Metropolis”, Zinny/Maidagan highlight the concepts underlying the construction of an aesthetic avant-garde.

We will also be showing a Zinny/Maidagan installation acquired this year as of February 2010, as part of the second major presentation of the MMK Collection, which will center on Concept Art.
www.mmk.art