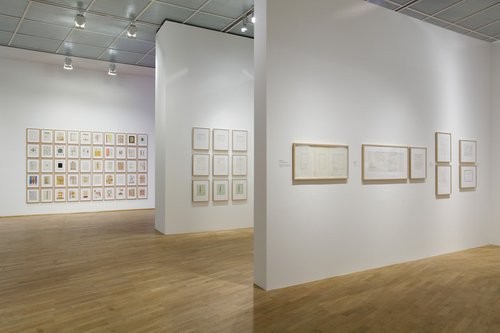 From March 28 until August 22, 2010 MMK
Museum für Moderne Kunst in Frankfurt/Main is showing conceptual art on paper from its abundant collection of graphic art for the first time. Conceptual art has been a key component of many artists’ visual outlook and activity since the 1960s. Above all, minimalist and concept art have developed new strategies, at whose starting and end points drawing often carries the artistic ideas. These can be articulated in pure concepts, or in graphs, designs or accompanying draft sketches. Here, drawing, writing and image frequently forge an independent aesthetic connection.

The exhibition will feature works by artists including Carl Andre, Dan Flavin, On Kawara, Joseph Kosuth, Robert Morris, Barry Le Va, Stanley Brown, Gary Kuehn, Franz Erhard Walther, Robert Barry, Lawrence Weiner, Alighiero Boetti, Blinky Palermo, Ilya Kabakov and Claes Oldenburg, as well as works by a younger generation of artists, such as Andreas Slominski, Tobias Rehberger and Nedko Solakov. Most of the above-named artists are represented in the show with entire groups of drawings, complemented by outstanding individual sheets. With a few exceptions, all the drawings on display will demonstrate a direct link to sculptural or conceptual works in the MMK Collection. We can describe the drawings of conceptual art from the 1960s generally as a reflection of psychological activity, as a work in progress. They impress us with their clarity and precision, can be instructions, a design drawing, assembly diagram or rough draft of an idea or even have the character of a statement or certificate. The signature confirms the artist’s authorship, even if the work, for example a mural, is realized by assistants or third persons. The functions of drawings can be very different: the drawing as decision; the drawing as explanation; the drawing as ritual; the drawing as investigation. In any case, they bear the individual “handwriting” of the respective artist.

The exhibition will feature a special presentation devoted to Hanne Darboven’s works on paper, donated to the MMK collection in 2001 by the Jean-Christophe Ammann Archive. They richly document the artist’s meticulous exhibition preparations and designs for the accompanying catalogs, her now legendary exhibitions at Kunstmuseum Luzern in 1975 and at Kunsthalle Basel in 1985. Parallel to this, MMK will be showing one of Hanne Darboven’s main works, »Ein Jahrhundert – Johann Wolfgang von Goethe gewidmet« 1971/1982, which has been part of the Collection since the Museum’s opening year, 1991. On this occasion, Hanne Darboven’s musical work »opus 25A« will also be presented for the first time, which the artist transformed into a minimalist composition in 1988 by transcribing the pure sets of numbers into musical notation.
www.mmk.art