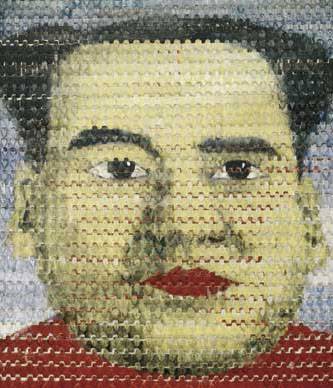 Thomas Bayrle on his exhibition:

Back in 1964, quite by »whim«, and it is one I cannot explain at all exactly today, I built / made / painted a »machine« in which hundreds of athletes perform gymnastics behind the portrait of Mao Zedong...

In the years that followed (until 1966) I then made another nine machines in which, in addition to another Mao – Western consumers brushed their teeth / enjoyed ice–cream / drank beer / marched / shaved – and were generally part of a large »collective« quite in keeping with China.

Bazon Brock referred to the machines as »soup catapults« – they are painted structures made of wood, equipped with an engine – and all the little figures reproduce the same movements.

At that time I was actually only interested in what Siegfried Krakauer termed the “Mass Ornament”.

I hardly heeded ideological differences, and, despite the protest this brought from my left–wing friends, mixed up Communist and capitalist elements and content...

In keeping with the motto: Technical patterns on the one hand / organic ornaments on the other, in my imagination East and West merged like warp and woof to for one and the same fabric...

Irreconcilable ideological opposites thus become ever more similar – and down through the years become blurred – to the point of the “Global Rock ’n’ Roll” today.

In the form of »40 Years Chinese Rock ‘n’ Roll« show, the MMK is continuing the series of individual presentations of current artistic positions in the area of installation art which was kicked off in 2002 under the aegis of the Dornbracht Installation Projects®.

Dornbracht Installation Projects® – a joint of venture by the MMK and Iserlohn–based designer bathroom fittings manufacturer Dornbracht (www.cultureprojects.com) – entail for a very special kind of long–term patronage. In addition, Dornbracht is enabling us to acquire a piece by the respective artist for the MMK’s collection.