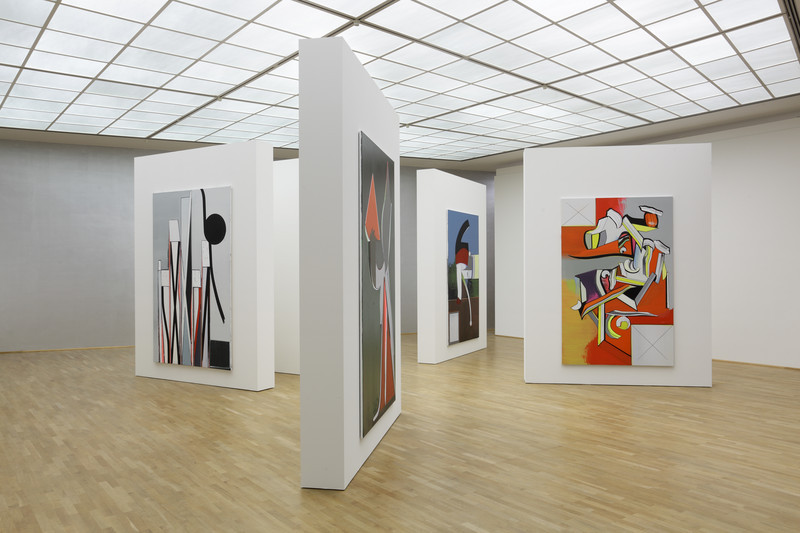 The Œuvre of Thomas Scheibitz (*1968 near Dresden) is as extensive as it is multi-faceted. Within this context, the painter will explore the theme of the human figure, which will be the chief motif of a solo exhibition by this artist for the first time.

In his paintings and sculptures, Thomas Scheibitz investigates the boundary between the figural and the abstract, employing familiar sights and translating them into a personal pictorial language in the course of a multi-stage process of abstraction. The point of departure for his themes and motifs are existing images from everyday and pop culture such as film, literature, music and advertising as well as architecture and design, but also art-historical models dating from the Middle Ages or the Renaissance. Drawing from innumerable archived impressions, Scheibitz transposes what he sees into a new pictorial idiom, thus arriving at the forms and structures of his paintings and sculptures.

In his preoccupation with the human figure, Scheibitz is concerned with how the painter employs abstract means to embark on the depiction of the human being. The classical human image serves him as no more than a marginal orientation. The achievements of art in modern times – e.g. of Mannerism, Cubism, Surrealism, etc. – nevertheless provide him with important formal impulses in his search for the figural, and animate his symbolic and form-like approximation of the human figure.
The exhibition, which will spread out over an entire floor of the MMK, will shed light on the conceptual and painterly development of Scheibitz’s oeuvre. Special emphasis will be placed on painting, sculpture, drawing and the artist’s source material.

The exhibition title “One-Time Pad” is the name given to a type of encryption used for secret messages which is considered to be impossible to crack. In using this term, Scheibitz is alluding to the coding process that he employs in his artistic work. In his paintings and sculptures he investigates, in a multistage process, the borderline between reality and invention, taking familiar phenomena and transposing them into his own personal pictorial idiom.

To accompany the exhibition there will be a catalogue designed by Thomas Scheibitz, with a foreword by Susanne Gaensheimer, texts by Beate Söntgen and Mark von Schlegell, and a discussion between Thomas Scheibitz and Isabelle Graw.
www.mmk.art