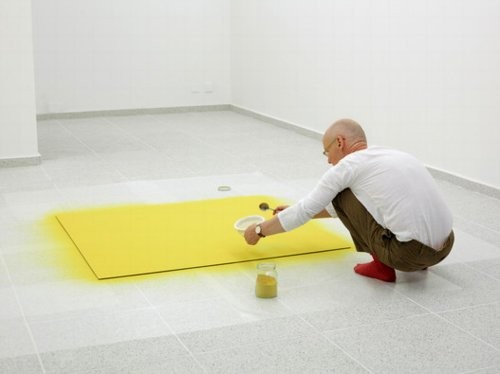 Wolfgang Laib first studied medicine before, influenced by non-European art and culture, turning his attention to making art. As a youth Laib had traveled with his family to India, and this is possibly what spurred his intensive focus on spirituality and non-European religions. This pronounced interest in Asian culture and philosophy is manifest in his art and instills it with a contemplative element. And it was in this context that he start working with natural materials that had an aesthetic of their own, such as wax, pollen and milk. The artistic results met with great recognition and Laib’s works made of pollen were exhibited alongside pieces by Hanne Darboven and Gotthard Graubner in 1982 in the German pavilion at the Venice Biennial. In 1987, Laib was awarded the prestigious Arnold Bode Prize by the City of Kassel. Countless further exhibitions followed, and a major retrospective in 2000 to 2002 ensured that Wolfgang Laib’s artistic oeuvre became well known outside Germany, too.

In 1977, Laib created his first work using pine, hazelnut, buttercup and dandelion pollen, sieved to create a temporary rectangular space on the floor. When collecting the pollen, Laub was of course constrained by the seasons and the times at which the respective trees blossomed, meaning that he had to follow nature. He makes use of different types of pollen, as these can be collected one after the other. Hazelnut blossoms first, then dandelion, followed by buttercup and finally by pine. They all differ in terms of color and consistency. The pollen, collected in glass jars, is sometimes stood on tablets, as a supplement to the rectangles exhibited on the floor. For Laib the material essence of the collected pollen is itself already an artwork. The new exhibition at MMK consists precisely of such a mass of pollen sieved to form a rectangle in a space on the museum floor – in this case hazelnut pollen. The fertile pollen, charged with solar energy functions in the museum context as a radiant, fragrant and seemingly floating shape of pure colored matter, while also acting as a natural attractant. A feel for the rectangle’s sensitive existence, as even a breath of air or a movement of a hand could disturb it, prompts great care and attentiveness among viewers.

In other words, each such Laib piece not only possesses aesthetic qualities but also functions as a metaphor for the uncertainties of nature and life. While we view the world against the backdrop of our knowledge and experience, even the most precise and concentrated observation never provides objective and absolute certainty on things, which thus always remain somewhat opaque. In Wolfgang Laib’s art, natural materials that have an aesthetic of their own merge to form an almost contemplative work, and the exhibition rooms morph into places of worship. And precisely such a space has now been reconstructed in MMK.
www.mmk.art