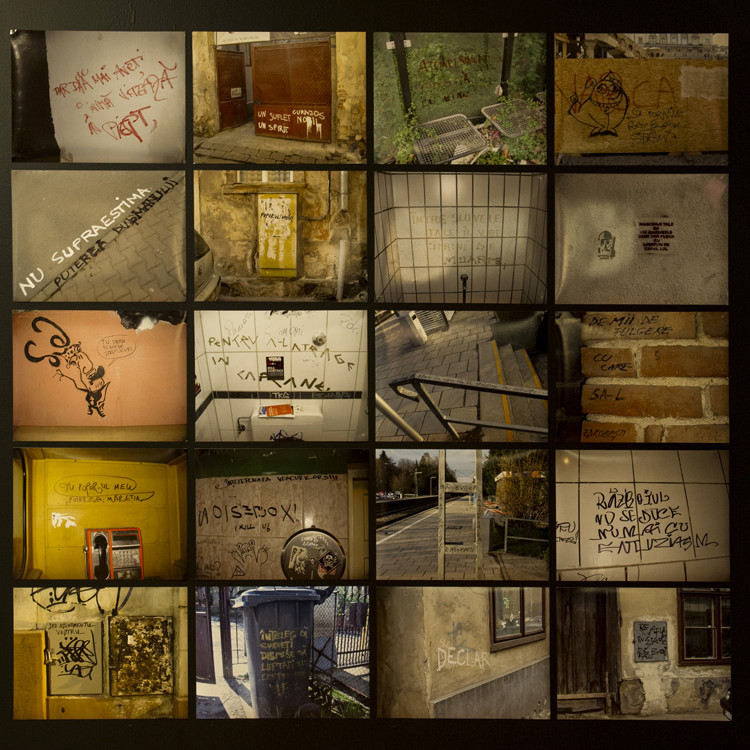 Between 19 December 2013 – 11 May 2014, MNAC puts on display the inactive (untill now) part of its collection of negatives as part of a curatorial discourse that tries to juxtapose two different hypostases of the exhibited visual documents: on one hand, the „primary material” un-organized and un-classified, but for this reason producer of potential meanings (metal cabinets full with boxes that contain glass and film clichés) and, on the other hand, the alternative archives realized by Mihai Oroveanu, subREAL group and Ciprian Mureșan.
The heterogeneous content of the archiving cabinets, the lack of an intelligible structure and methodical classification, allow for multiple interpretations, analyses and explorations. In the moment when this “magic world, where everything recurs and contributes to a context full of meaning (Vilem Flusser – For a Philosophy of Photography) will be deciphered in simplifying texts / words intended to make the images more easily accessible, the valorisation and interpretation of the contained information will be (predominantly) done via these codes. So as to strengthen this perspective we have added to the exhibition three types of narrations, as examples of possible trajectories for both the exploitation / manipulation of the archives and the evaluation / investigation of its functions and characteristics.
The first example refers to the imaginative curatorial selection, amplified by the sensibility of the photographer and by the collector’s subjectivity: photographs previously presented at MNAC, grouped in a thematically organised series – The Beach – by Mihai Oroveanu, to whom we owe, among other things the setting up of the clichés collection, and the establishment of the documentary corpus of the museum. The theme of this selection revealed itself, as many others along the time (some of them presented here as a slide-show), during the numerous (unconventional) reorganizations of the personal archive.
The second example is dedicated to the subREAL “case”. Starting with 1995 when the two members of the group (Călin Dan și Iosif Király) developed a series of projects that initially deconstructed the collection of ready-made objects by questioning the technical process of the act of taking photos (“To exhibit such images, and to reveal the counter-archival techniques that allow them to function as mechanisms of signification, is to lay one’s finger on the meaning production of the museum itself.”, Sven Spieker, SubREAL During the 1990s: Ironic Monuments, Tainted Blood, and Vampiric Realism in a Time of Transition, text to be printed). Their second step was to build their own archive, conceptually derived from the Art History Archive and Serving Art series. With the aim of creating a comprehensive overview of a more than ten years artistic investigations, we decided to present the “ground zero” moment – Dataroom and Deconstruction – along with the subsequent filiations of the later works, visually organized by Arnold Estefan.
The third example has been chosen for its possible attempt to overpass the “historical crisis”, the inherent linearity for both the archives and the photography itself. The photo-installation „Auto-da-Fé” of the artist Ciprian Mureșan (2008) visually documents graffiti –type interventions on the walls of some buildings in different Romanian cities. The photographed texts are subjective transcriptions of a few pages belonging to the text ‘Die Blendung’/ ‘Auto-da-Fé’ written by Elias Canetti in 1932 (a text considered by the literary critics to be an important document for the end of modernism). Combining the real (the urban fragments, the available information) with the imaginary (the “interior dialogue” translated into the written texts) Ciprian Mureșan makes the text representable again, thus magically charging it. Even if its discourse is decoded and communicated in the context of the other narratives presented before, this work is the closest approach to the original function of the image – that of the mediation between the world and the people.
For the duration of the four months when this exhibition is open, the public has the chance to be the witness of the inventory process and the (partial) digitization of the clichés. These digital images will be in their sight by way of a video-projection. We invite the public to participate in our proposed exercise for this segment of the exhibition and to imagine categories or keywords inspired by the randomly succession of the scanned photos. Fantasia mixed with scientific rigour could reveal amazing associations. From that point on, the inert archive will become active material for its inevitable transformations.
Raluca Velisar, MNAC curator