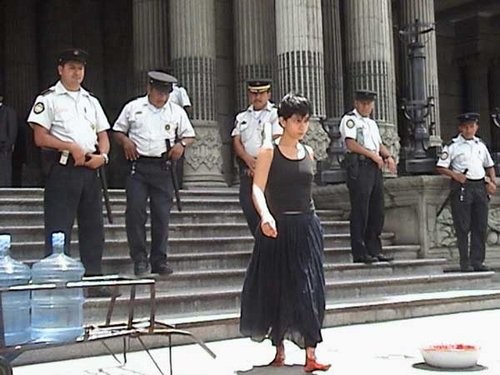 Having been awarded the Golden Lion for Best Young Artist at the Venice Biennale in 2005, Regina José Galindo uses performance and her own body as main devices in the artistic process. Through a kind of re-enactment, the artist substitutes herself to the weak and the humble, to the tortured and the oppressed, staging limit situation. Her own delicate, feminine body is mistreated, in a kind of “self-exposure” and unselfishly substituting herself to various traumas inflicted upon other human beings in oppressive political regimes. Regina José Galindo's discourse thus relates to other works in the activist area and gender issues with reference to ancestral shamanic myths and exorcising gestures such as Ana Mendieta's and Sigalit Landau's, to the rituals of resistance in Tania Bruguera's and Teresa Margolles' work: impressive installations over death and the excluded of society.

Focusing on tough issues of an oppressed humanity, Urgent Issues presents a selection of the most important works created between 1999 and 2009 and will be followed by a catalogue edited by PrometeoGallery.

DISCLAIMER:
THE CONTENT OF THE WORKS EXHIBITED IS INAPPROPRIATE FOR AN AUDIENCE UNDER 18 YEARS OLD.