A Changing Ratio: Painting and Sculpture From The Collection 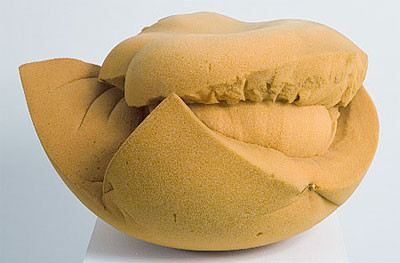 © John Chamberlain
Lo An, 1966
urethane foam and cord
12 x 18 x 18 in.
The Museum of Contemporary Art, Los Angeles, purchased with funds provided by The Acquisition and Collection Committee
A CHANGING RATIO: PAINTING AND SCULPTURE FROM THE COLLECTION

Referencing the title of a 1967 essay by Lucy Lippard, A Changing Ratio: Painting and Sculpture from the Collection, explores the trajectory linking non-representational painting of the early 1950s to the sculptural innovations of the late 1960s. Painting, no longer the dictator of production during these years, became secondary as sculpture found its long-sought independence and began to wield significant influence over art production. Art objects became increasingly physical, acting as vehicles for the advancement of both color and form. Jackson Pollock’s large-scale abstract expressionist works exemplify his interest in the objecthood of painting. With the total abandonment of the easel in exchange for working on the floor, his painting process became a very physical act of laying paint upon a dimensional surface. Mark Rothko’s monumental color field paintings—with their frameless, deep-set canvases and worked edges—possess an undeniable dimensionality. Robert Rauschenberg’s Combines act as a bridge between painting and sculpture, incorporating three-dimensional found objects within wall-hung painted surfaces. In sculpture, John Chamberlain introduced the use of new materials such as urethane foam, to render a soft version of his own painted and chromium-plated steel objects from the same era. Experimenting with similar materials, but to a very different end, Lynda Benglis created poured floor works with Polyurethane foam and pigment rendering beautiful, natural forms by way of physical action and gravity. And Carl Andre’s work represented in this exhibition by 8 Blocks and Stones takes to the floor where it runs along the earth in an active rejection of sculpture’s traditional preoccupation with height. Curated by MOCA Assistant Curator Rebecca Morse, A Changing Ratio includes the work of Lynda Benglis, Donald Judd, Franz Kline, Roy Lichtenstein, Robert Morris, Claes Oldenburg, Jackson Pollock, Robert Rauschenberg, Mark Rothko, and Andy Warhol, among others.
www.moca.org