A Tribute To Mike Kelley 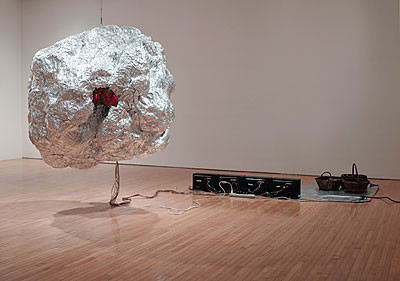 This exhibition is dedicated to the work and legacy of Mike Kelley (b. 1954, Detroit; d. 2012, Los Angeles). Since the late 1970s, Kelley has had a far-reaching influence on the Los Angeles art community, whether through his groundbreaking performances, installations, sculptures, and works on paper; his insightful critical writings; or his deep commitment to artists, as a peer and a teacher. Over the last three decades, his influence has extended to MOCA, with donations of his own works as well as those by local and international artists that have profoundly shaped the museum’s permanent collection.

A Tribute to Mike Kelley will encompass 23 of Kelley's works as well as works by John Altoon, Cody Choi, Douglas Huebler, William Leavitt, Marnie Weber, and Johanna Went, donated to MOCA by Kelley. Included will be eight parts of Kelley's 1982-83 performance and installation Monkey Island, a sexually charged adolescent cosmology represented by insects and monkeys, gifted in 1986 by the El Paso Natural Gas Company Fund for California Art, as well as four related works donated by Lannan Foundation in 1997; the sculptural installation Silver Ball (1994), given as a partial and promised gift by Blake Byrne in 2004; Two and Three Dimensions (1994); and Empathy Displacement: Humanoid Morphology (2nd and 3rd Remove) #3 and #7 (1990), gifted in 2007-08 by Alan Hergott and Curt Shepard.

A retrospective of Kelley's work is currently being organized by the Stedelijk Museum in Amsterdam and will travel to MOCA in 2014.

A Tribute to Mike Kelley is generously supported by Gagosian Gallery.
www.moca.org