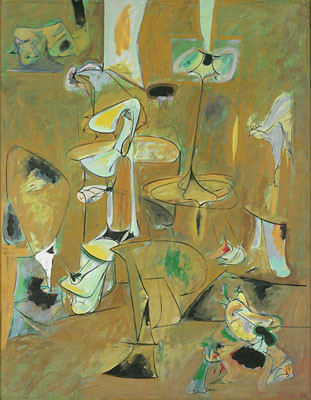 Arshile Gorky
Betrothal I, 1947
Oil on paper
51 x 40 in.
The Museum of Contemporary Art, Los Angeles The Rita and Taft Schreiber Collection Given in loving memory of her husband, Taft Schreiber, by Rita Schreiber
ARSHILE GORKY

Seminal abstract artist Arshile Gorky (born Vosdanig Adoian, c.1904–1948) is often considered the last of the great abstract surrealist painters and the first abstract expressionist. Born in an Armenian village on the eastern border of Ottoman Turkey, Gorky was a first-hand witness to the Turkish government’s Armenian Genocide of 1915, which led the artist’s family and thousands of others to flee. In 1920, Gorky emigrated to the United States and eventually settled in New York, where he became a largely self-taught artist. At a time when the American avant-garde privileged originality over traditional working methods, Gorky was a nonconformist who developed his personal vocabulary through a series of intensive apprenticeships to the styles of other artists, including Paul Cйzanne, Pablo Picasso, Fernand Lйger, and Joan Mirу, before developing his own unique and deeply influential visual language in the early 1940s. Gorky’s prominence in the New York art scene led him to befriend Andrй Breton and Roberto Matta—fellow йmigrйs and key figures in the Surrealist group—who came to have an enormous impact on Gorky’s mature style. Arshile Gorky: A Retrospective positions Gorky as a crucial founder of abstract expressionism, but also as a passionate and dedicated artist whose tragic life often informed his groundbreaking and deeply personal paintings. The first full-scale survey of Gorky’s work since 1981, this timely exhibition features nearly 200 of Gorky’s most significant paintings, sculptures, and works on paper, including two masterworks in MOCA’s collection—Study for The Liver is the Cock’s Comb (1943) and Betrothal I (1947). Arshile Gorky: A Retrospective is organized by Michael Taylor, the Muriel and Philip Berman Curator of Modern Art at the Philadelphia Museum of Art, where the exhibition is on view October 2009 through January 2010 before traveling to Tate Modern, London, in spring 2010. MOCA’s presentation, the third on the exhibition’s tour, is organized by MOCA Chief Curator Paul Schimmel. Arshile Gorky: A Retrospective is accompanied by a fully illustrated catalogue that includes new essays by Harry Cooper, Jody Patterson, Robert Storr, and Kim Theriault.
www.moca.org